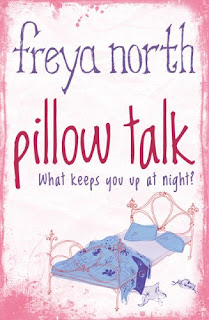 Reminder: I'm having a quiet week and trying to catch up on reviews. Weekly reading updates will begin next Tuesday.

I got a copy of Pillow Talk by Freya North from the British Babes Book Brigade (on Facebook) for discussion. I have since found out I must attend an event I can't get out of on the night of the chat, but . . . well, actually I'll try to sneak out if I can, anyway. Book chats are important, you know.

Freya North is a British writer and Pillow Talk is reminiscent of Jill Mansell's writing style, with a lovable and somewhat feisty heroine. Petra Flint is a jeweler, living and working in London. She is also a sleepwalker who has survived a broken home and is severely lacking in emotional support from her family. Her yearning to be loved has led her into a very bad relationship.

Arlo Savidge, once a budding musician, has been through a heartbreak of his own. After tragedy struck, he left his career behind and became a music teacher at an exclusive boys' school in Yorkshire.

Petra and Arlo spent many happy hours together as friends in their teenage days but they haven't laid eyes on each other in seventeen years. Neither has forgotten the other. At the time, they both had deeper feelings for each other than either ever admitted but the timing simply wasn't right, especially for Petra.

Naturally, Petra and Arlo bump into each other and take their old relationship to a new level, but there's a lot of, "Oops, almost got together but maybe I'm being irrational and should just dash on home," before one hunts the other down and gets the ball rolling, so to speak. It actually takes Petra 100 of the 441 pages just to figure out she doesn't belong with her annoying banker boyfriend, even though he clearly is a narcissistic [bad word].

But, once Arlo and Petra finally do manage to get their love affair going, the story really takes off. Arlo and Petra are really terrific characters and it's almost unbearable each time they dive into one of those, "Maybe this isn't going to work," phases. Freya North likes to call her books "feisty romps" because she can't stand the term "chick lit". And, I think "feisty romp" is an apt description. At its heart, Pillow Talk is romance and the characters have a great deal of heart, but there is definitely a bit of "feisty" in there.

Surprisingly, the writing is really not fluffy. In fact, I've got a bucketload of Post-its marking various vocabulary words I need to look up. Freya North's writing is sharp. I do think the so-called black moment is a bit of a stretch -- and it's a spoiler, so I can't share it with you -- but aside from the fact that the initial rejection of her banker boyfriend takes a bit too long, I found Pillow Talk a tremendously fun read, not only because the hero and heroine are terrific characters but because the secondary characters are every bit as wonderful as the protagonists. Those who are awful are believably awful; the rest are the kind of people you'd really like to have in your own little circle of friends.

One word of caution: There is some very, very bad language in this book (and a whole lot of sex). If not for the fact that I have another Freya North book on my shelf -- a freebie that came with a magazine I bought in the UK -- and the fact that the story itself was so very enjoyable, I would actually probably not have considered ever reading another book by this author because of the offensive wording. It's mostly in the first half of the book and tapers off a bit, but I just don't think any of those nasty words were necessary and they definitely put me off.

The bottom line: Pillow Talk is a solidly-written, well-plotted romance that could have used a wee bit of chopping, up front, and contains enough offensive language to merit a family warning. Recommended for romance fans who don't mind explicit language and moderately graphic sex scenes.

Call me a sap, but I still believe there is such a thing as "happily ever after," (which requires a great deal of effort on both sides, but still . . . ) so I really do enjoy the occasional romance. 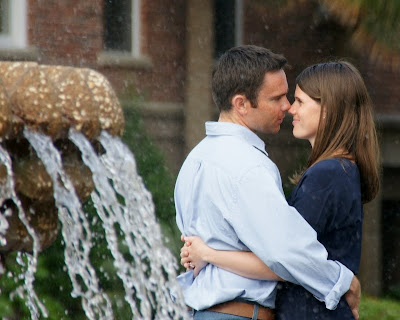 The two lovebirds above were posing for what I assume to be engagement photos in front of the pineapple fountain in Charleston. I just happened to be standing nearby and managed to snap a few lucky shots.

©2011 Nancy Horner. All rights reserved. If you are reading this post at a site other than Bookfoolery and Babble or its RSS feed, you are reading a stolen feed. Email bookfoolery@gmail.com for written permission to reproduce text or photos.
Posted by Bookfool at 11:32 AM