When She Woke by Hillary Jordan 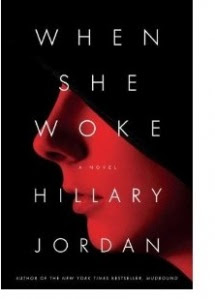 In a mood to review, again. Weekly updates will begin next Tuesday.

I know I'm jumping the gun, here, reviewing When She Woke by Hillary Jordan well before its October release date, but when a review copy showed up in my mailbox I was so excited that I lost any tentative grip I had on self-control and immediately began reading.

When She Woke is a retelling of The Scarlet Letter that takes place in an undated but obviously not-too-distant future. Hannah Payne has been raised with a strong religious background, working as a wedding-dress seamstress, still living at home as an adult. After embarking on an affair and becoming pregnant, she has committed a crime.

Criminals known as Chromes are injected with a virus that changes their skin color, the differing color depending upon the crime involved. In a time period when a plague has rendered a large portion of the population infertile, abortion is murder.

The man with whom Hannah has had an affair is married and very well-known. Refusing to reveal the father of her unborn child seals her fate. Caught and tried as the murderer of her unborn child, Hannah awakens in a cell where her every move is observed by guards and broadcast to the public. Her skin is bright red to reflect her crime. After weeks of nothingness in a barren room, she is released to a world where she is not only taunted but endangered. Where can she go and how will she survive?

There's so much to this story that I think I'll just keep my thoughts fairly general. When She Woke has a central character who has been stigmatized, questions herself and -- as the blurb says -- embarks on a "path of self-discovery that forces [Hannah] to question the values she has held true and the righteousness of a country that politicizes faith." Obviously, When She Woke is a very timely novel.

Hannah's true challenge begins as she is given a choice of living visibly in a world where she is in constant danger or moving into a home where the rules are so strict and petty that she's always in peril of being cast out and continually experiences punishing reminders of why she is a pariah.

I guess my biggest problem with When She Woke was that I never fully understood why Hannah felt abortion was an absolute necessity, given the fact that her family seemed more likely to accept a child than to harbor a known criminal. And, her intense and continued love of the man who impregnated her was, I thought, a bit irrational and hard to buy into. Not that love is necessarily a rational thing. Hormones have always led to tricky situations, haven't they?

Having mentioned what I consider some of the negatives, I do think When She Woke is a thought-provoking and surprisingly gripping book that will likely be a hit in book groups. There is a great deal worth discussing and the author does an excellent job of imagining the dangers of a world in which there is visible evidence of one's crime. The idea of people being visibly punished in such a way also seems stunningly plausible in a country where religion and politics are becoming increasingly blended, if not confused.

The ending is a little too neat and tidy, but the vast majority of When She Woke is excellent as Hannah's challenges become even more oppressive and life-threatening, the farther you get into the book. I love reading about characters who are so thoroughly backed into a corner that it's difficult to imagine a way out. When She Woke is chiefly about being yourself, not conforming to what society says you must do and be. I love the theme; I just didn't totally buy into the romance with the fellow who fathered the child she aborted.

Highly recommended, particularly as a book group selection. When She Woke is scheduled for release on October 4, 2011. Many thanks to Algonquin Books for sending me the advance review copy, which I'll be passing on to another blogger.

©2011 Nancy Horner. All rights reserved. If you are reading this post at a site other than Bookfoolery and Babble or its RSS feed, you are reading a stolen feed. Email bookfoolery@gmail.com for written permission to reproduce text or photos.
Posted by Bookfool at 7:26 PM