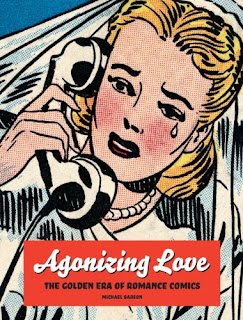 Agonizing Love: The Golden Era of Romance Comics
By Michael Barson
Copyright 2011
Harper Design - Comics/Design/History
208 pages, incl. Bibliography
During the late 40s to mid-50s, comic books took a decidedly adult turn with the release of romance comics. In Agonizing Love, author Michael Barson pays tribute to these laughably dramatic comics of the past with a brief history and a nice sampling of actual comics in a size large enough to make great coffee-table fodder.
The text in Agonizing Love is lighthearted and a little tongue-in-cheek, occasionally to the point that I'd have been tempted to give the author a gentle kick if he happened to be in the room with me. But, in general, I liked it because I learned about something new. Michael Barson collects romance comics, so those that are shown in the book are, to my understanding, from his personal collection. He talks about the origin of romance comics and how the originals sold so well that there was a tremendous surge of production by numerous comic book companies -- rather like what's happened with the sudden rise of paranormal young adult novels, I suppose. Romance comics were short-lived, disappearing in less than a decade, although they spawned a few comics like the Archie & Veronica series, which can still be found at some bookstores.
The text in Agonizing Love is minimal. Most of the book is dedicated to a look inside the comics. And, fortunately, you get to read an entire story each time you peek into a different comic book. The author doesn't tempt you and then yank the cookie out from under your nose by showing mere pieces of romance-comic stories.
I had an interesting love/hate relationship with Agonizing Love. The author seemed a little perplexed as to why the comics didn't last, although he did say they were often laughably dramatic. Perhaps he doesn't understand because he's male? Drama is one thing, but drama in which the female is frequently a simpering archetype whose only goal is to marry so she can cook, clean and sew is . . . well, kind of upsetting. It's awful to sit back and imagine your mother and grandmother having to live through that crap. Fortunately, I know at least my grandmother didn't succumb to societal norms. She was a well-educated, talented working woman and fiercely creative. So, that helped assuage my mind a bit.
The bottom line:
A fascinating peek into a unique phase in comic-book history, definitely recommended and especially fitting as a conversation starter. Be forewarned: If you're a feminist, Agonizing Love might make you angry for the sake of your mother or grandmother. But, it's a fun book and I really enjoyed reading the comics and text, learning about the strange, short-lived phase in which romance comics sold like hotcakes. I had to remind myself to just enjoy the drama a little, I confess, but if I ever get a coffee table I'll set this one out for guests to peruse. I think it would be loads of fun to watch someone flip through Agonizing Love and see what they have to say. One thing I really loved about the book was the innocence of the romance in those old comics. No nudity, no sex, sometimes even a bit of nervousness about kissing. Well, that's definitely something you don't see, anymore!
In other news:
Gosh, I sure am a busy girl. How are you? I've gotten a few books in the mail but I've been a little disorganized and will have to gather them to snap a photograph. Don't hold your breath. I am truly overwhelmed, now that I'm back to traveling to physical therapy and continuing to take my killer exercise class. But, I'll work on gathering the books together because I know those of you who drop by regularly adore photos of books as much as I do.
Reading-wise:
I am tremendously slumpy. Although I'm enjoying re-reading Simon's novel, Everything Beautiful Began After, I think fatigue is playing a role in my inability to keep eyes on a page. I'm also reading a pink book . . . um, I'll have to look up the title and put it in my sidebar -- kind of a Jill-Mansellish type of romantic British romp. Those poor bees are never going to finish with me, at the rate I'm going. So, I may drop The Beekeeper's Lament and start a different nonfiction read or just insert something very, very brain light like a children's book to try to jump-start my reading.
And, how about those cats?
Well, this one fell off the IKEAs, today: 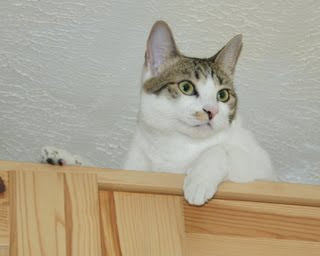 Poor Isabel. I think she must have rolled over in her sleep. Fortunately, there was a laundry basket full of clothing to break her fall, but it was still about a 7-foot fall and a very hard landing. She did not land on her feet. She hit about halfway off the basket, fell onto some Stuff on the floor and then bounced one more time before ending up sprawled by the bed. I just happened to be sitting on the bed and poor Izzy was shaken and humiliated. She seems okay, but I don't think she'll be sleeping up near the ceiling for a while!
While Isabel was recovering (with a continuation of her interrupted nap, naturally), I introduced Fiona to a game for cats on my iPad, which I found thanks to one of my son's ex-girlfriends, whom I'm friends with on Facebook. Gamesforcats.com is a site with free games hosted by Friskies cat food. Both of my girls think fishing is loads of fun and they very politely took turns, after Isabel woke up. 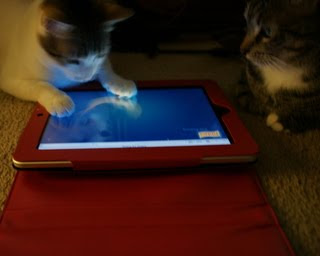 Posting will continue to be sporadic for the entire month of August, but September might be halfway normal. As my husband says, "We'll burn that bridge when we get to it."

©2011 Nancy Horner. All rights reserved. If you are reading this post at a site other than Bookfoolery and Babble or its RSS feed, you are reading a stolen feed. Email bookfoolery@gmail.com for written permission to reproduce text or photos.
Posted by Bookfool at 2:49 PM