All Woman and Springtime by Brandon W. Jones 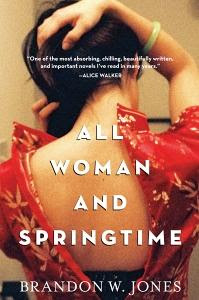 All Woman and Springtime by Brandon W. Jones
Copyright 2012
Algonquin Books - Fiction
372 pp.
Let's just get the important bit out of the way, up front: All Woman and Springtime by Brandon W. Jones is one of the most important and surprisingly well-written books I've read in 2012. I gushed about it to my friends but I think the sound bite by Alice Walker says it best:
"One of the most absorbing, chilling, beautifully written, and important novels I've read in many years."
Yes. All that. I can't recommend this book highly enough.
Gyong-ho (nicknamed Gi) is a mathematical genius who was starved and abused at a labor camp in North Korea. Il-sun is a beauty whose spirit has not yet been broken. When they meet in an orphanage, they become fast friends. Gi is a hard worker who lives in terror of the slightest infraction but she's protective of her rebellious friend, who often dawdles and underproduces at the clothing factory where they both work.
When Il-sun falls for a man she thinks can improve her status, the relationship leads to a horror neither girl can fathom as they're smuggled through the Demilitarized Zone and sold into sexual slavery in South Korea, along with a third girl named Cho.
As Gi, Il-sun and Cho are forced to engage in acts at least two of them could not even begin to imagine in their naivete, they also gradually become aware that the world outside North Korea is not at all what they believed it to be. Fragile in some ways, strong in others, the three young women must deal with the cruelty and anguish inflicted upon them, both mentally and physically.
There is a "graphic and mature theme" warning by the author and the book is a difficult read because the characters are so fully dimensional. First you get to know their daily lives in North Korea and to understand what the author calls "a living Orwellian nightmare". Then you follow them through the even deeper terror of human trafficking. I quickly found that I cared about the characters and hoped they would get through the trauma and horror of their experiences.
There are three things I have to say about the graphic and mature theme warning:
1. There is no superfluous sexual matter in All Woman and Springtime. What's there is horrifying and shocking but the author limited the graphic and sometimes violent scenes to what is necessary to understand the brutality of human trafficking.
2. The ending is uplifting. You will close the book with a smile on your face. I actually was moved to cry tears of joy -- something that almost never happens with books.
3. Take that warning seriously, though. It's definitely not a book for youngsters.
I highly recommend reading Brandon Jones' essay on how he came to write All Woman and Springtime. There are no spoilers; it's informative and answers a lot of the questions I found lingering in my mind after I closed the book. How did he research the book? Was there some compelling reason that Jones chose North Korea and/or human trafficking? Are the citizens really that indoctrinated to the respect of their "Dear Leader" in North Korea, in spite of the fact that most of them are starving? Is this really Brandon Jones' first book?!
Recommendation:
An excellent read, highly recommended but definitely hard to stomach, at times. Believable characterization and dialogue, compelling storytelling, stunningly mature writing and an uplifting ending make All Woman and Springtime an all-around great read and the kind that needs and deserves to be passed around. I found it absolutely unbearable to put this book down; I had to know what was going to happen to Gi, Il-Sun and Cho.
Recently walked in:
The Queen by Robert Lacey - from HarperCollins
The Aleppo Codex by Matti Friedman - from Algonquin Books
The Revised Fundamentals of Caregiving by Jonathan Evison - from Algonquin Books
Victricia Malicia by Clickard and Meyers - from Flashlight Press
The Tesseract by Alex Garland - from Paperback Swap
Mrs. Delaney: Her Life and Her Flowers by Ruth Hayden - purchased
In my defense, 3 out of 6 of those books were surprises.
Here. Have a flower. 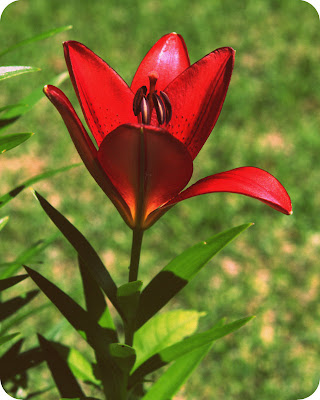 ©2012 Nancy Horner. All rights reserved. If you are reading this post at a site other than Bookfoolery and Babble or its RSS feed, you are reading a stolen feed. Email bookfoolery@gmail.com for written permission to reproduce text or photos.
Posted by Bookfool at 10:49 PM