More minis: The Reconstructionist by Nick Arvin, Forgotten Country by Catherine Chung, Heading Out to Wonderful by Robert Goolrick 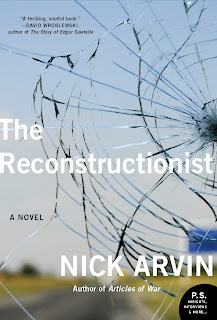 The Reconstructionist by Nick Arvin is a truly unusual novel and I think that is one of the things I enjoyed about it. Ellis Barstow and his brother Christopher used to run to the intersection near their house when they heard a crash, to gawk at the sight as young boys will do. Years later, Christopher died at that same intersection.
As a mechanical engineer, Ellis has taken a job in an automotive factory. He's adrift, not particularly happy with his job but unsure what to do. Then, he sees Christopher's former girlfriend. Always captivated by Heather, Ellis follows her home and then drives on. Eventually, he finds a way to run into her again. When he does, she tells him her husband is looking for help. John Boggs works as a "reconstructionist", using engineering to determine how an accident occurred and testifying at lawsuits as an expert witness.
Ellis finds the job oddly satisfying and he has a comfortable friendship with Boggs. But, he also begins an affair with Heather that eventually results in Boggs taking a suicidal, cross-country trip. Ellis follows him. Will Boggs survive his self-destructive road trip? What's more important to Ellis, friendship or love? What really happened when Christopher was killed?
I absolutely loved Boggs. The witty dialogue between Ellis and Boggs drew me into the book, the questions about what would happen kept me there. And, I also loved the use of physics and math to determine how an accident occurred. The reconstruction process is utterly fascinating, plus, I'm accustomed to the way engineers talk and think, so I found The Reconstructionist an oddly comforting read for one so disturbing. It's a sad story, but not without hope. Not what I would call a "thriller," as I've seen it described, but more of a psychological exploration of accidents and how they effect people. The author has worked as a reconstructionist and it shows. This book has the ring of truth. I would avoid reading it if you've suffered a traumatic car accident loss, but otherwise I recommend The Reconstructionist. Just don't expect fast pacing. 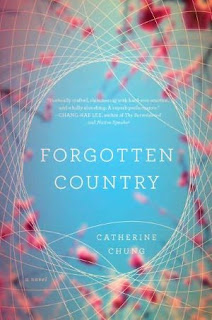 The Forgotten Country by Catherine Chung is a book I really should have abandoned, but for some reason I just kept on plugging away. I think it was one of those cases in which the writing was comfortably paced and I was hoping things would improve, but really . . . it's just a bummer.
Janie's sister has disappeared, their father has cancer and even when they manage to briefly track Hannah down, she doesn't respond to their calls or emails. As a youngster, Janie was told that every generation of her Korean-American family has lost a daughter and she must watch out for her sister. Now, her grandmother's prediction appears to be coming true.
When their father finds that the best chance of extending his life is a treatment only available in Korea, Janie and Hannah's parents pack up and move to their home country, leaving Janie in charge of finding Hannah.
Janie and Hannah have a terrible relationship. Bummer. Their dad is terminal. Double bummer. Nobody in the family is willing or able to really share details of life, either past or present. Triple bummer. The whole family is a communication train wreck and, of course, cancer books just make me insane. Nicely written but depressing and I just cannot bear a book in which people don't ever bother to answer each other's questions. My friend Paula enjoyed this book and shared her copy with me. I just didn't enjoy Forgotten Country at all. I'm not even certain who to recommend it to. 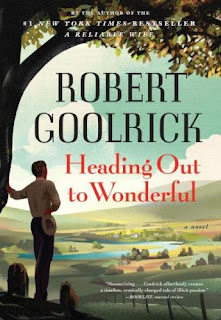 Heading Out to Wonderful by Robert Goolrick has not yet been released, so I'm a little hesitant to review it but I want to go ahead and clear my sidebar. Don't worry, though: it's a June release. Not a long wait!
Robert Goolrick had a runaway hit with A Reliable Wife (<---my review, in self-interview form). I liked the writing but was not enamored of the storyline. However, since I liked Goolrick's writing and the story sounded intriguing, I've been looking forward to reading Heading Out to Wonderful.
Set in the years just after WWII, Heading Out to Wonderful tells the story of Charlie Beale, a butcher who decides to settle in a small town called Brownsburg, nestled in a beautiful Virginia valley. There, he falls in love with the wife of the town's richest man, a beautiful blonde from a poor rural family in the area outside Brownsburg. A movie buff, Sylvan has an unusual accent that she's picked up from years of listening to radio serials and a stunning wardrobe that the local seamstress has created for her.
You know the romance is doomed. But, what about Sam, the child who is caught in the middle of their affair? Will the odd entanglement ruin young Sam for life? What will happen when Charlie and Sylvan's affair is discovered? Will Sylvan save herself and throw Charlie to the proverbial wolves? Will the people of Brownsburg forgive them?
Ack. So many questions with horrible answers. I loved the writing, once again, but the story just made me want to kick the author in the shins, I'm sorry to say. Smooth, understated, gentle, beautiful writing is marred by weirdness and violence. I think a lot of people will love Heading Out to Wonderful. I hoped I would, but the involvement of Sam and the ending were terribly uncomfortable and jarring. I don't think Robert Goolrick is the author for me. One caveat: Heading Out to Wonderful isn't as graphic/erotic as A Reliable Wife. However, the descriptions of butchering can be pretty detailed and if you find the killing of animals for meat upsetting, definitely avoid reading this title.
©2012 Nancy Horner. All rights reserved. If you are reading this post at a site other than Bookfoolery and Babble or its RSS feed, you are reading a stolen feed. Email bookfoolery@gmail.com for written permission to reproduce text or photos.
Posted by Bookfool at 9:49 PM