The Cove by Ron Rash 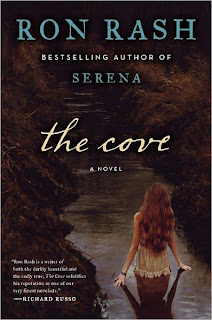 The Cove by Ron Rash
Copyright 2012
Ecco (An imprint of HarperCollins)
Historical Fiction/Suspense
255 pp.
Rested, he began rowing harder. The river widened and then narrowed again. A black panel slid over the sky, locked into place a moment, then slid back, the moon and stars above once more. He turned and saw a bridge's silhouette, high and solid as a ship's hull. The river ran straight for a long while and no lanterns glowed from shore or window, the world absent but for water.
--from p. 33, The Cove
Reason for reading: I've wanted to give Ron Rash a try, for a while, and The Cove sounded like a nice, creepy but unusual read (for me, anyway) so I asked to join the TLC Tour. I plan on making The Cove my last tour book as I've decided to unschedule myself and work harder at reading titles I already own.
Quick summary: Laurel and Hank live in a dark, dreary stretch of Appalachian land known as the cove, thanks to the fact that their father was snookered into buying cheap farm land, not realizing how poorly it would produce. WWI is on. Hank is home from the war, where he lost a hand. Both parents are now dead. Laurel is lonely because a visible birthmark and a string of familial bad luck have convinced the superstitious town folk that she's a witch. And, a mute stranger with a secret has shown up in the cove. Secrets, lies, wimpy rich boy out to prove himself, love, beauty, jealousy, suspicion, murder . . . it's all there in some form.
What I liked about The Cove:
The atmosphere, the love story, the strength of Laurel and Hank, and the hint of mystery kept me going.
What I disliked about The Cove:
The beginning and the end. In the middle of the book, I was very much caught up in the narrative and enjoying myself. The setting was definitely gloomy ("gloamy" -- which I think means "dusky," as in the half-light of dusk, is a word that was repeatedly used to describe the cove) but I appreciated it for its realism and atmosphere. The ending was just too tragic for me.
In a comment to my dismayed question about whether Ron Rash routinely writes tragedy, BermudaOnion said, "Ron Rash doesn't see his stories as depressing - he thinks his characters are doing the best they can in less than ideal circumstances and he thinks there's hope in that."
I don't disagree with that comment and I didn't, in fact, find the story depressing. It is definitely atmospheric, dark and moody, and I do enjoy the occasional creepy read. I liked Laurel's fortitude, Hank's determination to function one-handed, the farmer just outside of the cove who was nonjudgmental, and the stranger, Walter. What I disliked was the ending. You could definitely say it is "tragic but hopeful". However, it didn't end with the bright ray of light I like in an ending. The tragedy was too tragic, the hope too thin.
In other words:
My distaste for this particular book is obviously a very personal thing. From a technical viewpoint, I think the writing is solid. I don't know the Appalachian dialect, but I read up a little on Ron Rash and found that he has Appalachian ancestry that goes back centuries and that people from the area find his writing authentic. I did feel like the wimpy rich guy out to prove himself, Chauncey, had the ring of "device" about him. Although I found most of the characters realistic and three-dimensional, Chauncey struck me as an archetype plunked into the tale specifically to alter events.
Which reminds me . . . the ending definitely did surprise me. It just wasn't a surprise I liked. I read up a little on Ron Rash's other titles and am pretty much convinced he's just not the author for me. I'd recommend The Cove to people who like a suspenseful, atmospheric read with just a hint of mystery. There is some brief, intense violence.
Fun of the week:
A Carolina wren (lower left) takes the family out for flying practice (the youngsters are at upper right -- hope you can enlarge this one). 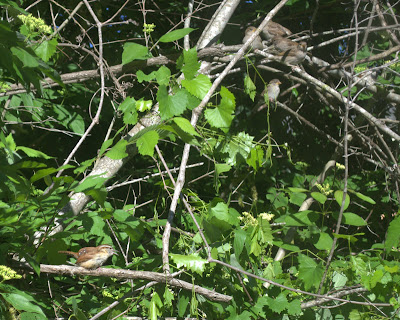 ©2012 Nancy Horner. All rights reserved. If you are reading this post at a site other than Bookfoolery and Babble or its RSS feed, you are reading a stolen feed. Email bookfoolery@gmail.com for written permission to reproduce text or photos.
Posted by Bookfool at 6:32 AM