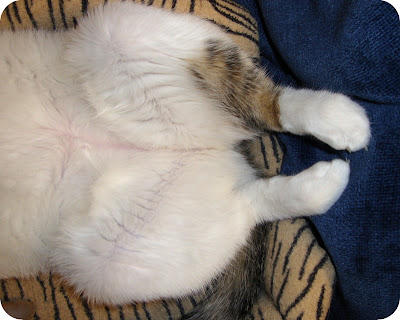 I saw a cat photo that was similar to this and thought it was so cute that I snapped a shot of Isabel's fancy pants. I hope she doesn't mind if I share with the world.
The writing workshop: 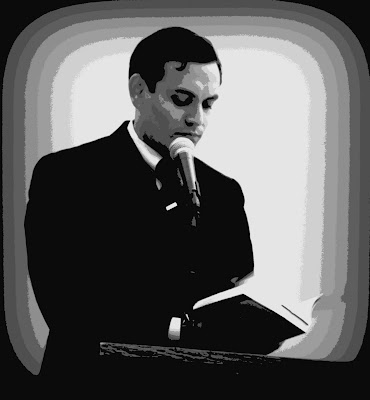 Simon Van Booy is teaching a writing workshop in the Berkshires of New Hampshire in June. For details, click on that first sentence (which leads to his website) or Download the PDF. I am, of course, a huge admirer of Simon, both as a writer and a person. If I could attend, I would. I had fun fiddling with that photo of Simon, taken at his reading in the Boston Public Library in 2011.
And, the reading update:
I have been fairly quiet because I haven't had the urge to write, since Kiddo returned home; and, last week I had Rebellious Reading Brain. None of my ARCs were appealing to me. So, I took a break from the ARC stack to read the following: 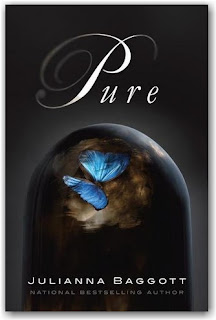 Pure by Julianna Baggott - I put Pure on my wish list a couple months before it was published, after reading about the bidding war over the manuscript and the early sale of movie rights to the book, then my friend Tammy sent me her copy. Thank you, Tammy! Pure was just what I needed -- a wildly original combination of post-apocalyptic and dystopian reading, the first in a trilogy. It's very dark, but I liked the fact that even the "Pures" in the dome are living in a dystopian world, although the "wretches" outside think life in the dome must be perfect.
Tammy and I had a really fun discussion about Pure. We both detected different themes. Tammy noticed a WWII influence (the Detonations, based on the aftermath of Hiroshima and the attempt to create a superior race) and I thought the author was making a statement about today's America (pre-Detonation, the red-flag-waving Pures were diluting women's rights, for example). I'm tempted to reread Pure and highlight the parts I thought related to our current society because I rushed through the book so quickly that I didn't mark a thing. Two Wars by Nate Self - The memoir of an Army Ranger whose chinook was hit by an RPG during a mission to recover a man who fell out of a helicopter in Afghanistan, told in the usual fashion. First a prologue teaser scene as Self and the other Rangers are shot down, then all the way back to why the author joined the Army, his training at West Point, romance and marriage, early Army postings, the crash and firefight, then the aftermath.
Two Wars is a Tyndale book and therefore has a Christian bent, which I liked. The training part was a bit slow, I thought, but I was never tempted to put it down. I wanted to read about the crash and I'm used to the slow build-up in a war book. Huzzybuns is also reading this book and I enjoyed talking to him about it as I was reading. The only real let-down was the PTSD section. The author really didn't go into much detail about his post-traumatic stress experience. The crash and firefight are extremely gripping. 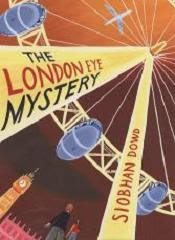 The London Eye Mystery by Siobhan Dowd - I think this one is a middle reader, although Amazon says it's for ages 8 and up and I can never remember exactly what a "middle reader" is. Salim is visiting his cousins in London and goes for a ride on the London Eye. When the ride ends and Salim doesn't get off, cousins Ted and Kat decide to investigate his disappearance.
I've had The London Eye Mystery on my wish list for a couple years and just finally got a copy on Saturday. I gobbled it down on Sunday before we left the house to see The Avengers and have loaned it to my son's girlfriend. What makes The London Eye Mystery really special is the fact that Ted is autistic and the way he functions makes it easier for him to see clues that the adults have overlooked. A very satisfying little mystery that's ingenious and very entertaining. Autism is never mentioned specifically, but Ted does comment that Einstein may have had the same condition.
I also read half of The Queen: A Life in Brief by Robert Lacey, last night, and will likely finish that up, today. The good news is that it's one from the ARC stacks. Hopefully, I've exited my ARC-resistant phase. The Queen is about Queen Elizabeth II and the author apparently apparently writes only about royals. It's distilled from two of his larger works about Queen Elizabeth, a small bite of a book written especially for her Diamond Jubilee year and it's a pretty breezy read.
In other news:
I still am finding that I don't feel much like sitting at the computer to write, so posting may be a little sporadic, although I hope not. I have several reviews to catch up on. I'm going to skip writing full reviews of Pure, The London Eye Mystery and Two Wars.
©2012 Nancy Horner. All rights reserved. If you are reading this post at a site other than Bookfoolery and Babble or its RSS feed, you are reading a stolen feed. Email bookfoolery@gmail.com for written permission to reproduce text or photos.
Posted by Bookfool at 12:02 PM