Mini reviews - The School of Essential Ingredients by Erica Bauermeister, M*A*S*H by Richard Hooker and A Wedding in Haiti by Julia Alvarez

I've fallen behind on reviews a bit, so it's time for a few minis! 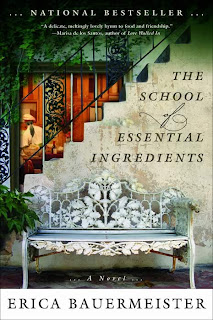 The School of Essential Ingredients by Erica Bauermeister is a book I began reading because I ended up unexpectedly eating out without a book handy. Fortunately, I had two donation bags in my car and found one title that was not a reject or already-read title but one smashed badly by the United States Postal Service and since replaced, though not yet read.
Absolutely everyone seemed to be reading and gushing about The School of Essential Ingredients a couple years ago. The story of a group of people who come together for a cooking class taught by a restaurateur named Lillian and how each of them is "transformed" by food and friendship, I must admit . . . it didn't do much for me. I'm not actually sure why I continued to read the book, except maybe that old urge to complete what I've started (which I've actually battled quite well, this year -- till April, anyway).
Each chapter tells a particular student's story, after the introduction to Lillian and her class, then each of their tales is fully wrapped up in the epilogue. The only story that fully satisfied me was Chloe's. It had a nice, punchy ending line that I can't repeat because it's a spoiler. Darn. Here's my favorite quote, though (a quotation within dialogue):
'Life is beautiful. Some people just remind you of that more than others.'
--p. 171 of The School of Essential Ingredients
I think part of what bothered me about the book was the fact that Lillian's teaching method made me think, "PANIC!" I could not imagine going into that fictional class and not feeling like a total fool. It didn't seem like Lillian taught so much as lectured and divvied up responsibilities for the group creation of certain dishes. Often, I thought, "If she gave me that task, I'd either stand around trying to find someone to tell me what exactly I was supposed to do or make a nuisance of myself asking for step-by-step directions. I am not an intuitive cook. I'm a follow-the-recipe-exactly cook.
Not a favorite, but I know a lot of avid cook/foodie friends loved The School of Essential Ingredients and I can see why; it's a gentle book of friendship, food and love. It just wasn't for me. 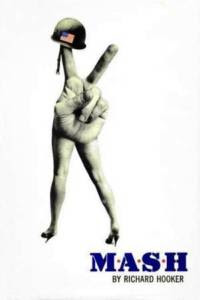 M*A*S*H by Richard Hooker is a book that I read because my copy was such a mess that I figured I ought to read a bit of it, decide whether or not it was worth keeping and donate it if possible. I ended up reading avidly into the wee hours.
Unlike the television series, which went on forever and ended up wrapping up the stories of the entire cast (As I recall; I don't remember the movie at all, although I've seen it), the only two characters who are followed from the beginning of their service at the 4077th Mobile Army Surgical Hospital to their return to the United States are Hawkeye and Duke. But, their stories and that of Trapper John and the rest of the characters are extremely satisfying.
And, the book is really quite funny. It's also written in a way that makes the setting easy to visualize and you can see why it would have been considered cinematically viable. The characters are well-rounded, the dialogue witty, the plot points clever, if not brilliant, and the setting and action believable -- the latter undoubtedly because the author was a M*A*S*H surgeon, himself. M*A*S*H is really quite perfect and worth holding onto for a reread. Too bad my copy is such a disaster. 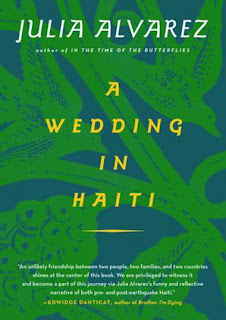 A Wedding in Haiti by Julia Alvarez is the only new release in this bunch. A surprise book sent to me by Algonquin Books, A Wedding in Haiti is a memoir divided into two sections. Alvarez first describes how she and her husband Bill came to know a Haitian named Piti (who was illegally working in the Dominican Republic) when Piti was a teenager. She once told him she'd attend his wedding when he married, never expecting him to take her up on her offer. But, in 2009, he called with the news that he was marrying soon.
Alvarez already had plans but she canceled them to fulfill her promise. The trip from the Dominican Republic turned out to be quite a little adventure that included taking a car-sick bride (Eseline) and baby back to the Dominican Republic after an unusual wedding and plenty of interesting lessons in culture and hospitality.
In the second portion, Alvarez describes their return to take Eseline back to Haiti because she was depressed and homesick. The Haitian earthquake had occurred just 6 months prior and Alvarez and her husband had learned a lot about poverty in Haiti, so they used their return trip as an opportunity to bring some necessities (primarily food) to the families and friends met on their first journey. They also decided to drive through Port-au-Prince to see the aftermath of the earthquake.
What I loved most about A Wedding in Haiti was reading about Alvarez's obvious affection for the people she met, in spite of language barriers, the Haitian generosity and hospitality and the history of the island and its two separate countries. I really knew very little about the history of Haiti and the Dominican Republic, apart from the fact that there are no remaining indigenous people at all and Haiti is a deeply impoverished country. A Wedding in Haiti definitely whetted my appetite for more reading about Haiti and the Dominican Republic, both nonfiction and novels.
I found the writing a little bit flat, but was really smitten with Alvarez's compassion (and that of her husband), impressed with the humanity of Alvarez and her spouse if not totally blown away by the memoir. I've never read any of Julia Alvarez's fiction, but I'll have to amend that, soon.
I discovered you can view a gallery of the photos from A Wedding in Haiti at Julia Alvarez's website -- a nice feature because they're in color, larger than those in the book (so you can view the detail) and nicely labeled.
A quote worth thinking about, by a friend who had a similar reaction to Julia and Bill's (feeling compelled to do something to help after viewing the impoverished conditions) after visiting Brazil:
"It stops you in your tracks. Mind and body. When we see a thing, what then is the obligation?"
©2012 Nancy Horner. All rights reserved. If you are reading this post at a site other than Bookfoolery and Babble or its RSS feed, you are reading a stolen feed. Email bookfoolery@gmail.com for written permission to reproduce text or photos.
Posted by Bookfool at 7:36 PM