The Uninvited Guests by Sadie Jones 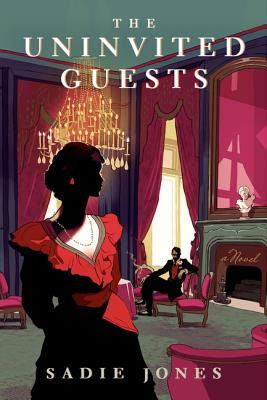 The Uninvited Guests by Sadie Jones
Copyright 2012
Harper - Historical Fiction
260 pp.
The Uninvited Guests tells the story of a single day in the life of the Torrington family in turn-of-the-20th Century England. It's eldest daughter Emerald's birthday. Her mother Charlotte's second husband has gone to town to try to find a way to save their beloved home, Sterne, leaving the family to wonder about the outcome. While preparations are being made for Emerald's dinner party, 9-year-old sister Imogen, aka "Smudge", prepares her own surprise.
Their plans are interrupted, however, by the sudden appearance of a number of bedraggled guests who claim to have been sent by the railroad after a disastrous crash has left them with nowhere else to go for food or rest. The family is unable to contact the train station because of a hinky phone connection and nobody is quite sure what to do with them, although the one thing Emerald hears clearly is that they're supposed to send their cart. Shortly after that, the Sutton family shows up (unfortunately, I don't remember a thing about them) and a neighbor drops by. Eventually, a final guest shows up and he is quite different from the rest. While the son of the family, Clovis, invites the final guest to the dinner party, the other displaced train passengers are ignored.
Why is this particular guest appealing to Clovis while the rest are so easily overlooked? What will become of the passengers? Will they be fed? Will stepfather and second husband Edward Swift find a way to keep the family from having to move to smaller digs?
First, let's ask Ann Patchett what she thinks (e.g., copy the cover quote):
"The Uninvited Guests is at once a shimmering comedy of manners and a disturbing commentary on class. It is so well written, so intricately plotted, that every page delivers some new astonishment. It is a brilliant novel." --Ann Patchett
What I liked about The Uninvited Guests:
While I would not necessarily use the word "brilliant", I agree with the part I underscored. I am very impressed with Sadie Jones' writing. She has a unique, lively turn of phrase so imaginative that I found myself frequently stopping to reread sentences. Style, that's what it is. Sadie Jones has style.
It was the last day of April. She felt the extraordinary softness of the season on her face and braced herself for a strict talking-to; it if must be audible, she ought to at least get some distance from the house.
The air was complicated with the smells of sharp new things emerging from damp soil. Small tatters of clouds dotted the watery sky. To her left was the door to the kitchen garden and stables. Ahead of her, reaching far and further, in the broadest geometrical sweep, was the country over which Sterne presided. It spread out beneath and beyond, reaching into straining, dazzling blue distance, where the fields became indistinct and hills dissolved into nothing.
~p. 3 of Advanced Reader's Edition of The Uninvited Guests (some changes may have been made to the final print version)
Descriptions like that quotation above kept me reading, as did the hint of mystery and the crazy antics of Smudge, who has a great plan that involves a horse. I won't ruin that bit for future readers. It's very entertaining. There are some interesting surprises. Unfortunately, I pretty much had the big surprise ending figured out. But, I still did like the concept.
What I disliked about The Uninvited Guests:
The Uninvited Guests is a truly bizarre book. The characters, apart from Smudge, are surprisingly unlikable -- especially Charlotte, who refuses to take charge of her own household, melting away to her room upstairs and completely ignoring the unexpected invaders. Occasionally, the guests spring loose from the room into which they're shuffled or someone pops in to say, "We're working on --" Actually, I'm not sure what they said to the passengers but now and then they were appeased. They were, however, for the most part so thoroughly ignored that I kept wanting to pop into the book to help out. Surely someone could find them a bit of cheese and bread? A little water? Meanwhile, a storm rages. Well, at least you know they won't be sent to the garden.
It was a mystery whether or not anyone would ever take care of those poor stuck passengers in addition to the question of whether or not the family would get to keep the house. I think it might also be anybody's best guess whether or not a reader will care by the end. I found the characters so unlikable that by the time I closed the book, I realized that I actually didn't care whether or not they got to stay in their fabulous estate. It was awfully large for so few people, after all.
Recommendation:
Recommended with slight hesitation. Fantastic writing and a very strange and unique storyline are marred by frightfully unlikable characters. I have mixed feelings about The Uninvited Guests. I can't say I didn't enjoy reading it, but I can't say I loved it, either. In general, I consider The Uninvited Guests an average read. However, since I'm completely besotted with the author's writing style, I'm very happy that I have another of her books, The Outcasts, on my stacks. I purchased it in England, last year, but haven't gotten around to reading it. Wahoo! Something to look forward to!

Note on the cover: The cover at top is the image on the ARC. I'm not sure what the final cover image looks like, although the image at left is the one that is most commonly posted online. I'm quite fond of the ARC cover and dislike the faceless look of the blue one at left, so I opted to put my favorite at the top. I do think the dress in the image at left works better, though.
©2012 Nancy Horner. All rights reserved. If you are reading this post at a site other than Bookfoolery and Babble or its RSS feed, you are reading a stolen feed. Email bookfoolery@gmail.com for written permission to reproduce text or photos.
Posted by Bookfool at 4:36 PM

Email ThisBlogThis!Share to TwitterShare to FacebookShare to Pinterest
Labels: book reviews, historical fiction, recommended but not a favorite