Legacy of Rescue by Marta Fuchs 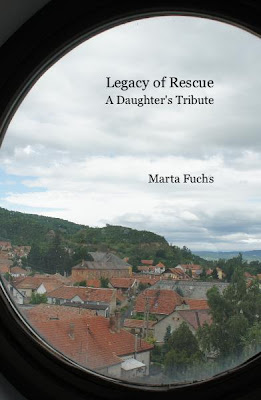 Legacy of Rescue begins with the story of Morton (Miksa) Fuchs, a Hungarian Jew who survived forced labor during WWII, thanks to a gentile named Zoltan Kubinyi.  In Legacy of Rescue, the elder Fuchs' story is told in his own words as he related it to his daughter, who translated with only a few alterations for clarity.

I was expecting a detailed story of one man's escape from death, but the WWII portion of the story is actually only a fraction of the book.  Legacy of Rescue goes well beyond the story of Miksa Fuchs, the individual.  It wasn't just Fuchs, himself, who was saved but over 100 men.  After cleverly dodging instructions by superiors to keep his charges alive after they were no longer considered useful, Zoltan Kubinyi was himself arrested.  He died of illness in a Siberian labor camp in 1946 but he was not forgotten.  Legacy of Rescue also tells the story of how the Fuchs family tracked down Kubinyi's family and documented the rescue so that Zoltan Kubinyi could be memorialized as a Righteous Gentile.

There's an awful lot to this slender memoir.  It's one man about being aware of what a gift he'd been given and, although not stated in those words, Miksa Fuchs' story is very much about paying it forward -- being kind and positive and loving.

Legacy of Rescue is a tremendously moving book.  As you'd expect of a Jewish family in WWII, very few of his relatives survived.  After the war, Miksa Fuchs returned to his home, opened a grocery store, married, and started a family.  But, Hungary was occupied by Communists and torn by further war.  Eventually, the Fuchs family crept across the Austrian border (into Austria) in a night-time escape reminiscent of the Von Trapp family's flight from Austria in The Sound of Music.  WWII had long since ended but the horror had not.

Eventually, the Fuchs family settled in the United States.  Miksa changed his name to Morton and the family thrived.  The Fuchs children (and grandchildren) grew up hearing about Zoltan Kubinyi.

What makes Legacy of Rescue special is the way Mr. Fuchs reacted to his experience.  When you read about the elder Mr. Fuchs -- the terror, hardship and hunger he survived, the loss of much of his extended family, the years of Soviet occupation -- you can easily imagine how he could have become a broken, sad, bitter man.  Instead, he remained well aware of what a rare gift he'd been given and determined to honor the hero who made it possible for his children and grandchildren to exist.  He taught his family to spread kindness and love.  He was a man of optimism and joy.  Clearly, his family has carried on that legacy of joy and kindness.

Highly Recommended - Legacy of Rescue is a beautiful, heartwarming, inspiring book that will make you want to be a better person.  I originally gave it a 4/5 at Goodreads because there were times I felt it was a bit disorganized and I lost track of who was speaking, but that's really a minor complaint and after a couple weeks of reflection I returned to Goodreads and changed my rating to 5/5.

©2013 Nancy Horner. All rights reserved. If you are reading this post at a site other than Bookfoolery  or its RSS feed, you are reading a stolen feed. Email bookfoolery@gmail.com for written permission to reproduce text or photos.
Posted by Bookfool at 12:45 PM