Poison by Bridget Zinn and a Fiona Friday photo 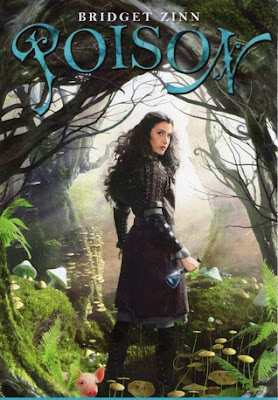 Poison is just a wee bit on the wobbly side.  It reads like a first effort and it probably was one.  But, the author is deceased, so that makes me feel like it's okay and I gave it a 4.5/5 rating.  Maybe she didn't have time to polish the work, but Poison is such a delight I just felt like giving it a high rating.

Kyra is a master potioner ("There's a better word for that, Mom," said Kiddo.  And, then neither of us could remember what it was).  She's on the run after trying to kill her best friend, the princess.  For over half the book, you have no idea why Kyra tried to kill Ariana.  Instead, you follow in Kyra's footsteps as she hides, acquires a scent-seeking piglet to help her locate the princess, who is herself in hiding (because Kyra missed for the first time ever when she threw a poisoned needle at Ariana) and getting to know a pleasingly awkward, adorable guy named Fred. The story of how Kyra ended up trying to kill her best friend and why is told slowly, through Kyra's memories and dialogue.

Poison is an adventurous, funny, creative fantasy.  It took me a while to get into the story because it's a fantasy (and not stellar writing).  I always have a little trouble with fantasy worlds that come off sounding like they're a mash-up of medieval, modern, paranormal, whatever.  Poison is set in a world with a magical kingdom but the princess once says something "sucks" and there are hints of the modern world mixed in with swords and potions.  If you're a regular fantasy reader, that won't bother you.  It's just something that throws me off.

By the time I got to about page 150, I couldn't bear to put the book down and I ended up with a reading hangover from staying up late to finish, but it was worth the pain.  The last 100 pages are by far the best, as the attempted murder is explained and the funniest scenes take place.  There were two little twists that completely threw me off-guard.  I love being surprised, so I got a kick out of both.  I was concerned that Poison might be the first in a trilogy and not wrapped up as I like, since there are so freaking many trilogies in the YA category, these days, and few books that stand on their own.

No worries.  Poison is thoroughly, satisfyingly wrapped up.

Highly Recommended to lovers of fantasy, YA fans and escapist readers who like a change of pace.  Don't expect perfection.  The writing is very good but I think the book could have tolerated a bit more nipping and tucking.  That mattered not one whit.  I loved Poison and think it is totally heartbreaking that the author died so young.

I am grateful to Sassymonkey for drawing my attention to Poison.  Thanks, Karen! 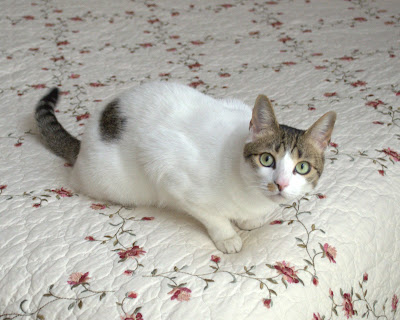 I'll change it when he comes home for a visit, but doesn't Isabel look great on it?  She's such a princess, she should probably have some kind of a pink, flowery crown on her head but lying on a girly quilt suits her, also.

Jericho (graphic novel) or Blitz by Vince Cross.  I've already mentioned Jericho very briefly in another post and Blitz was not a great book, although I did learn a bit about Anderson shelters (pre-fab, metal bomb shelters distributed in WWII England).  Blitz is a children's book, fiction, from a series of fictional diaries. It's rather bland but not a complete waste of time -- just probably better left to children.  I'm happy that I learned a little and I enjoyed the photos in the back of the book.


©2013 Nancy Horner. All rights reserved. If you are reading this post at a site other than Bookfoolery  or its RSS feed, you are reading a stolen feed. Email bookfoolery@gmail.com for written permission to reproduce text or photos.
Posted by Bookfool at 9:32 PM