The India Fan by Victoria Holt 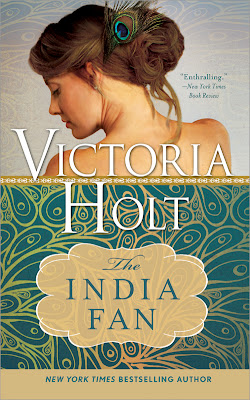 Drusilla Delany has never thought too highly of the wealthy Framling family.  A rector's daughter, Drusilla lives in the rambling rectory with an absent-minded but kind father who is happy with the simple things in life and completely besotted with the Greek classics.  He pays little attention to Drusilla, who is closer to her nurse, Polly, than her father.

When Drusilla is invited to the Framling estate to play with Lavinia Framling, she is curious about the house more than the child.  Lavinia is a beautiful, spoiled brat who treats Drusilla with contempt.  She is the closest little girl in proximity to the estate, though, and Lady Harriet finds the studious, intelligent Drusilla a suitable companion for her daughter.  Since the rector is in Lady Harriet's employ, Drusilla can't really refuse.  Thus begins a strange, long-time friendship in which Drusilla is compelled to accompany Lavinia from one school to another and eventually becomes Lavinia's hired help.

During one of her early visits, Lavinia's brother Fabian insists that they pretend to be his slaves and sends them to fetch forbidden objects.  Drusilla returns with a peacock fan from India.  But, she is quickly chastised and told of the fan's curse.   From England to France to India and back, danger follows Drusilla.  Will the curse follow her throughout her lifetime?  Or, is the peacock fan's curse just the silly whim of a sad, old woman?

What I loved about The India Fan:

Technically, I suppose The India Fan is historical romance, but there are three men Drusilla may or may not end up with and they are all woven in and out of the story. In truth, you always know who Drusilla is going to end up with and the romance ends up feeling secondary to the story of Drusilla's friendship with and employment by Lavinia, as well as her deep friendship with Polly -- who is pretty much a surrogate mother.  I liked the fact that it wasn't all gushy romance, instead focusing on friendship and setting.

The changing settings are one of the best things about the book.  Because Drusilla accompanies Lavinia, she travels pretty extensively.  It took me a while to figure out the time period and I found that a tiny bit annoying, at first, but eventually looked at figuring out the time period as a bit of a challenge and searching for clues to figure out when the story was taking place became rather fun.

What I disliked about The India Fan:

I'm afraid the book did ramble on a bit and Drusilla can be a bit severe.  But, even though Drusilla is just a wee bit stuffy, she has a big heart.  So, I cared about Drusilla and wanted to know what would happen.  I especially wanted to see her through to eventually finding love and her place in the world.  She's a typically stubborn historical-fiction heroine who will not simply settle down and marry merely because everyone else thinks she should.

Lavinia is a nasty character and her unchanging personality does grate a bit.  And, the mystery is not really all that mysterious.

Recommended - I didn't love The India Fan because it's a bit overlong, but Victoria Holt's writing is captivating enough that I was never tempted to set the book aside.  An engrossing, escapist read with exceptional characterization, an solid storyline, and rather unique and fascinating historical settings (which led to further reading online). Victoria Holt is a pro, of course. I can't complain about her writing style.  Apart from being a bit detail-heavy -- which some people love, but I do not -- it's pretty close to flawless.

©2013 Nancy Horner. All rights reserved. If you are reading this post at a site other than Bookfoolery  or its RSS feed, you are reading a stolen feed. Email bookfoolery@gmail.com for written permission to reproduce text or photos.
Posted by Bookfool at 8:00 AM