Catch-up reviews: Zack Delacruz by Jeff Anderson, Three Days in the Country by Patrick Marbur, The Fortnight in Sept. by R. C. Sherriff

Those of you who read my blog regularly or have read it for a long time know that I always take time off during the holidays to be with family. There won't be as much family time, this year. We're not going anywhere and Huzzybuns has used up most of his vacation time. Eldest and his wife and child are bound by their odd work schedules, as is Kiddo, who has just gotten a new job and will only be home for a couple of days. But, I still plan to take a little time off. Till then, I'm going to ditch the usual posts and play catch-up, again. I'm still pondering my goals for 2016. 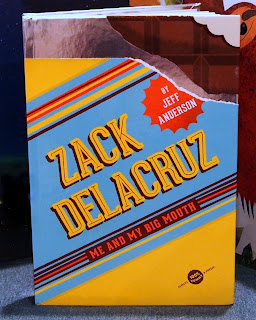 Zack Delacruz: Me and My Big Mouth by Jeff Anderson is a middle reader about a bullied boy who has only one close friend. He goes to an assembly on bullying and later stands up for someone else being bullied without thinking it through. This calls the teacher's attention to Zack and she puts him in charge of chocolate sales to pay for a dance. Then, a classmate who checked out a large amount of chocolate admits she doesn't have the money because she "had an accident" with the chocolate and didn't sell it.

Zack doesn't want to ask his father for money because his father is proud of him, for once, for being in a position of responsibility. When Zack realizes what really happened to the chocolate (highlight to see spoiler: she ate it all), he decides he needs to intervene. But, what can be done to earn the last of the money in time to save the dance?

When I began reading Zack Delacruz, I was overwhelmed by the sheer quantity of puns and didn't have high hopes for the book. However, the story won out in the end. I liked Zack's creativity and found that his voice sounded authentic to me. The author appears to have a pulse on the middle school vibe. It's also worth mentioning that I enjoyed puns at that age; it's only as I've gotten older that they've begun to annoy me, so it seems likely that Zack Delacruz will be a bigger hit with its intended audience than a jaded old thing like myself and I'm giving it a thumbs up. 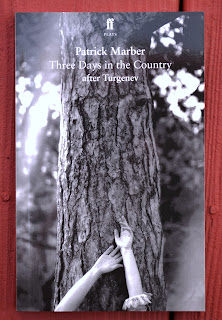 Three Days in the Country by Patrick Marber (after Turgenev) is a play based loosely upon Ivan Turgenev's A Month in the Country (which I have not yet read - Turgenev is now on the wish list). We saw Three Days in the Country at the National Theatre in London during our vacation. Click the title to see a YouTube video entitled "Three Days in the Country: Turgenev, unrequited love and comedy" that shows the actors talking about the play. It was brilliantly acted and there were some very funny lines that we wanted to remember (Mark Gatiss mentions our favorite in the video) so we went back to the theatre bookstore to buy a copy of the play, a couple days later.

I read plays and screenplays, on occasion. Sometimes they are every bit as interesting to read as they are to see but there was something absolutely unique and magical about Three Days in the Country on stage that simply couldn't be gleaned from the reading, so I felt myself longing to see it acted out, again, while I was reading the book. The truth of the matter is that the acing was so brilliant that nothing could hold a candle to seeing it. And, yet, there's no doubt there are some wonderful lines:

Natalya:  What do you think of Bolshintsov?

Rakitin:  (thinks a moment) He's a dullard. Meeting him is the same as not meeting him.

The verdict: I wish this play were available on DVD. But, the written play is definitely entertaining. 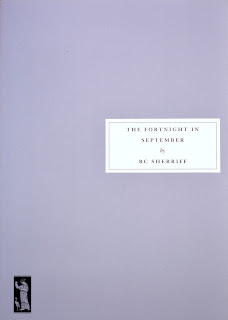 The Fortnight in September is understated, charming, and intimate. The first 100 pages describe the family's preparation for and journey to the shore, the rest the vacation itself. Nothing major happens, and yet I found the book was very difficult to put down. I was both enthralled by the nuanced dialogue, the tiny tensions between members of the family and their own internal struggles, and amazed that something so entirely restrained could be, at the same time, oddly mesmerizing.

As startling as it is for the fact that one can find a character driven book in which so little of consequence occurs gripping, The Fortnight in September is also impressive for its descriptive passages and definitely is one of my favorite Persephone titles (so far).

Bottom line: Zack Delacruz starts out badly but becomes more interesting as the plot unfolds and its protagonist comes up with clever solutions to his problems. While not laugh-out-loud funny to this reader, I have a feeling it resonates with its target middle-school audience. Three Days in the Country is witty and entertaining but better seen than read. It was a short-run play with stellar actors (including Mark Gatiss, who plays Mycroft on Sherlock and John Simm, who played The Master in Dr. Who -- actually, there were 4 actors who had Dr. Who in their credits); unfortunately, it's also over. I believe we saw one of the final performances. The Fortnight in September is amazing for the fact that it is both understated and compelling at the same time. I may be more startled than some because I tend to prefer plot-driven books over those that are about characterization, but the bottom line is that I loved it.


©2015 Nancy Horner. All rights reserved. If you are reading this post at a site other than Bookfoolery  or its RSS feed, you are reading a stolen feed. Email bookfoolery@gmail.com for written permission to reproduce text or photos.
Posted by Bookfool at 2:45 PM