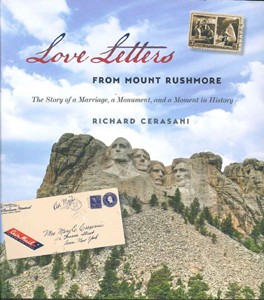 Love Letters from Mount Rushmore: The Story of a Marriage, a Monument, and a Moment in History by Richard Cerasani
Copyright 2015
South Dakota State Historical Society Press - Biography/History
195 pp., incl. Index and Sources

Richard Cerasani knew his mother kept the treasures from her many travels in her attic; but, it was dark, cold, and not easy to access, so he seldom bothered taking the time to look at them. It was the idea of finding and framing a particular piece of memorabilia that sent him on a search in the attic. But, an old steamer trunk surrounded by smaller items caught his eye and inside that trunk Cerasani found a surprise, a bundle of letters exchanged by his parents during the time his father was in South Dakota, working at the site of the giant carving of four American Presidents' heads, Mount Rushmore.

Love Letters from Mount Rushmore is the story of the romance of Arthur and Mary and the months when the author's father and mother were separated, reunited, and parted again while Arthur Cerasani, an artist, worked at Mount Rushmore.

Like peeking into the private letters and photo albums of a stranger, Love Letters from Mount Rushmore tells about a young couple very much in love and shows how difficult it was for them to live apart while also giving the reader a glimpse inside the experience of one man working on the creation of a national monument during the Great Depression, when jobs were scarce and the funds for the creation of the monument could fade away for a time, closing down work completely.

Recommended - An intriguing tale of romance and longing, Love Letters from Mount Rushmore is packed with family and historical society photos, making for a quick, fascinating, and very personal read. If there's anything at all that I didn't like about the book, it's the fact that it piqued my interest in the story of the monument to the point that I really want to read more about the creation of Mount Rushmore. Just watch; it will likely become a new obsession in the coming months.


©2015 Nancy Horner. All rights reserved. If you are reading this post at a site other than Bookfoolery  or its RSS feed, you are reading a stolen feed. Email bookfoolery@gmail.com for written permission to reproduce text or photos.
Posted by Bookfool at 6:58 PM