Five Children on the Western Front by Kate Saunders 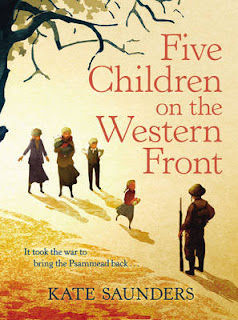 Five Children on the Western Front by Kate Saunders was an impulse purchase made while on vacation. I had a particular title from the "Buy Books for Syria" program (with proceeds to Oxfam) in my head but had already gone into 3 Waterstone's stores without any luck locating a copy. However, in a massive stroke of unexpected genius, I bought Five Children on a whim. It was one of my favorite reads in 2015.

At the beginning of Five Children on the Western Front, the "five children" of the title travel forward in time after their friend the sand fairy grants a wish, getting a glimpse of their future without understanding the meaning of what they see.

The story then fast-forwards to 1914. WWI has begun, the eldest child, Cyril, has finished officer training and is preparing to head for Europe. It's that time when Britons were convinced that the war would be over in a matter of months, so he's optimistic as he leaves. Meanwhile, the two youngest children -- one of whom, Edie, has been added by the author -- find the sand fairy in a gravel pit on their property. He hasn't appeared in years and he's very cold and grumpy, his magic drained.

Life spins around the sand fairy's recovery and the short hops, present and future, that eventually occur -- sometimes due to wishes, accidental or otherwise, sometimes not. Bobs is studying at Cambridge, Anthea is in art school, Jane is in high school, the Lamb an adventurous young boy, and Edie the sand fairy's chief caregiver and advocate. Slowly, it becomes apparent that the sand fairy has returned because he needs to be taught some lessons. But, while the sand fairy is learning about how bad he was when he was a god, the reader is also learning about the horros of war as WWI drags on, friends and loved ones are killed or badly injured, food is rationed, Cyril continues to fight for years, and Bobs and Anthea end up doing their part for the war effort, as well.

I won't spoil what happens or how the book ends but I knew from the quote on the cover that said simply, "heartbreaking", as well as that first jump into the future, that bad things were going to happen. What really stunned me was how the most painful scenes were carried out. Yes, some bits of Five Children on the Western Front are heartbreaking, but the story was also uplifting and moving and beautiful.

Highly recommended - A children's story (probably middle reader) that is charming, funny, bittersweet, and beautifully written, Five Children on the Western Front is one of my favorites of the year and a book I will probably return to. But, first, I need to unbury Five Children and It. I'm sure I have a copy around here, somewhere.


©2015 Nancy Horner. All rights reserved. If you are reading this post at a site other than Bookfoolery  or its RSS feed, you are reading a stolen feed. Email bookfoolery@gmail.com for written permission to reproduce text or photos.
Posted by Bookfool at 3:29 PM