The Dust That Falls from Dreams by Louis de Bernières 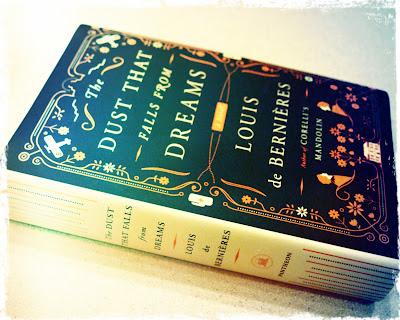 First things first: I used an online editor to alter the above cover image so that it would look a little less like I plunked it on an ugly kitchen counter (which I did) and more romantic. So, bear in mind that if you're looking for that cover of the book, the color is slightly off. I also noticed there are very few images of that exact cover on view at Google, so it's possible the cover has changed -- but it may have just been more widely reviewed elsewhere (like, say, England) where the cover is not the same. I have confidence in your ability to locate a copy, regardless of the cover, for what it's worth. And you definitely should seek it out.

The Dust That Falls from Dreams was written by the author of Corelli's Mandolin, which I have not read but definitely plan to because I loved Louis de Bernière's writing. It's the story of three families and how their lives are impacted by WWI. The book opens with a bit of background with a description of Queen Victoria's demise, leading into the Edwardian era and then the true beginning of the story. The McCosh family is having a party to celebrate the crowning of a new king. There are four girls in the McCosh family, three boys in the Pendennis family, and two remaining sons in the Pitt home, two having been lost in the Boer War.

At the party, Ashbridge Pendennis asks Rosie if she'll marry him one day. Rosie is only about 10 years old but she's already beautiful and the favorite of all the neighboring boys. Years later, war breaks out. As the Great War stretches on, the reader travels back and forth between the trenches and the home front. There are multiple viewpoints but what really stands out is the contrast between a home where food becomes scarce and bad things occasionally happen and the trenches, where all is misery, fatigue, horror, rot, and fear with only the occasional respite and plenty of camaraderie. It is, at times, very graphic when describing life at the front.

Rosie and Ash's romance is at the heart of the book but you get to know the characters in all of the families pretty well. To say much more would be to give away a bit too much, so I'll tread around plot with care, but I must say that I absolutely loved The Dust That Falls from Dreams. Some of you may remember way back in 2006 or 2007 that I started a thing called the "Chunkster Challenge" because I can be intimidated by fatter books and wanted to challenge myself to read them (and people wanted to join me). At 511 pages, some might not consider The Dust That Falls from Dreams a chunkster but I do. Anything over 400 is getting up there, in my opinion, and I have to really love a book to stick with it that long.

I didn't want The Dust That Falls from Dreams to end . . . and that's not something that happens often.

One of my favorite parts was very timely. Daniel, who is bilingual because his mother is French, is asked to say a prayer and here's what he chose to say:

Translated, it means, "For the good things on the table, for the beautiful things in life, for love, peace and poetry, God be blessed." When I read that, I closed the book for the night because it was so beautiful I couldn't bear to read another word. The next day I was glued to the television for hours, watching news about the attack on Paris. The prayer helped soothe my soul, that night, when I opened the book again. I know that has nothing to do with the book itself, but I thought it was worth sharing.

The story is a rollercoaster. Sometimes it's funny. The characterization is absolutely wonderful. Mr. McCosh is a cheerful inventor who makes money and loses it with equal speed. His personality reminded me of my father's; I absolutely adored him. Rosie and Ash seem both perfect for each other and doomed. Any time you read a book about WWI, you know many young men are going to die and I felt like I was holding my breath, waiting for that to happen, during much of the book (which does go a bit beyond the end of the war). Sophie is also a truly delightful character, one who makes up her own words:

He met Sophie in the hallway, and she said, "I think you've got a loose tappet. Your Henley sounds egregiously valetudinarian."
"Gracious me," said Daniel. "You're right of course. I did notice, but--"
"You mean, it is stupendously teratitistic and inordinate that a mere handmaid of Adam should have noticed such a thing?"
"Honestly, Sophie! Teratitistic? Where do you find all these funny words?"
"If I need a new word, I make it up," said Sophie, pertly. That one means 'monstrous' I hope. The metilogomy is Greek."
"Metilogomy?"
"Etymology, silly."

Highly recommended - Splendid depth of characterization, heart-tugging emotion and a vivid sense of time and place make The Dust That Falls from Dreams one of my 2015 favorites. It's also one of those books that had me reaching for the dictionary quite a bit and thinking that I need to resume my former habit of keeping a vocabulary notebook.

©2015 Nancy Horner. All rights reserved. If you are reading this post at a site other than Bookfoolery  or its RSS feed, you are reading a stolen feed. Email bookfoolery@gmail.com for written permission to reproduce text or photos.
Posted by Bookfool at 8:26 PM