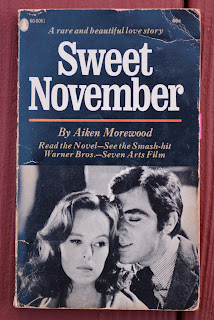 You can see Sweet November (published in 1968) is far from a new release. More than likely, I spent a quarter on that used copy at left. I happened across my copy while looking for another book and, remembering the movie (which I saw as a child and only could remember from the emotions it generated), I picked the book up and immediately began reading.

Charles is an executive whose family has run a business making boxes for over 80 years. He's British but has been in the U.S. for several years with the intent of expanding his box-making dynasty. He's successful and fulfilled but does little beyond work.

When Charles realizes his British driver's license has expired, he is forced to make time for a trip to the DMV to acquire an American license. At the DMV, he's impatient and twitchy waiting for the written test. Finally, it begins. He has a photographic memory so he presumes he'll whip through the test in no time but a woman behind him keeps asking him questions. When he turns around to hush her, he's called up front and the proctor tears up his test for cheating. The woman, Sara, follows him as he calls work from a phone booth to say he'll be late because he was caught cheating. This alone fascinated me. Instead of saying, "It's her fault; I was trying to hush her," he blames nobody, tells his second in command, "I was caught cheating," and simply stays for the next test.

Sara and Charles share hotdogs on a bench and she insists that he must come view an apartment she's renting out, the next day. He's charmed by her quirky questions and lighthearted personality, so he meets up with her and ends up eventually following her back to her home, where she asks him if he'd like to stay with her in November.

It turns out Sarah likes to "fix" people. Charlie's life runs by the clock, "All hurry hurry, ding ding," as Sara puts it. She wants to break him of this destructive pattern. He agrees.

I won't spoil what happens. Most of the 142 pages of Sweet November are dedicated to their time together in November. Charles knows he'll have to leave when November ends. He is really quite a sharp-witted character and Sara is delightful. But, there's something up with Sara, a reason that even when one of her men falls in love with her she is unwilling to let anyone stay. When Charlie predictably falls for her, will he be the exception?

Recommended - Witty, wonderful dialogue, great characters, and a quirky, bittersweet story make Sweet November a winner. Now, I have to find a way to watch the movie.

©2015 Nancy Horner. All rights reserved. If you are reading this post at a site other than Bookfoolery  or its RSS feed, you are reading a stolen feed. Email bookfoolery@gmail.com for written permission to reproduce text or photos.
Posted by Bookfool at 5:32 PM