The Tree by John Fowles 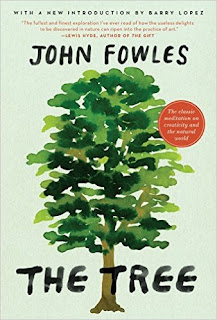 The Tree by John Fowles came to me in ARC form in 2010 from HarperCollins, and I'm sure I looked at its slimness (at 91 pages, some reviewers have referred to it as an essay) and told myself, "That will be a quick read!" I failed to finish it in 2010 and just recently returned to it. I remembered that I'd set it aside and wondered why when I picked it up a second time.

John Fowles was pretty fricking erudite, that's why. Thin as the book is, it's not always easy reading and I found myself looking up more than a few words. But, at the same time, it's packed with wisdom.

Evolution has turned man into a sharply isolating creature, seeing the world not only anthopocentrically but singly, mirroring the way we like to think of our private selves. [p. 26]

But I think the most harmful change brought about by Victorian science in our attitude to nature lies in the demand that our relation with it must be purposive, industrious, always seeking greater knowledge. This dreadfully serious and puritanical approach (nowhere better exhibited in the nineteenth century than in the countless penny magazines aimed at young people) has had two very harmful effects. One is that it turned the vast majority of contemporary Western mankind away from what had become altogether too much like a duty, or a school lesson; the second is that the far saner eighteenth-century attitude, which viewed nature as a mirror for philosophers, as an evoker of emotion, as a pleasure, a poem, was forgotten. [p. 33]

I could keep quoting for quite a while. In spite of its size, I managed to mark 15 passages. The Tree is, at its core, a meditation on the importance of nature to humankind through the personal experience of its author; but it also challenges our perception of nature, of growing things that can't speak to us directly but can touch our hearts and souls, of life around us, not just in us. My reading of The Tree felt pretty timely to me as I'd just recently read The Sixth Extinction, in which Elizabeth Kolbert talked to a scientist who is monitoring the way trees are marching in step with climate change, moving as the climate around them changes.

Recommended - At times so scholarly in its wording that I found myself rereading a sentence or paragraph three times, at times fluid, The Tree is a very moving piece of work about something intensely personal to the author, John Fowles, but also a book that challenges us to think about our world and all its parts as a whole. It's really quite thought-provoking and pertinent, especially as the end of the latest world conference to hammer out guidelines for slowing climate change has just concluded.

©2015 Nancy Horner. All rights reserved. If you are reading this post at a site other than Bookfoolery  or its RSS feed, you are reading a stolen feed. Email bookfoolery@gmail.com for written permission to reproduce text or photos.
Posted by Bookfool at 4:46 PM