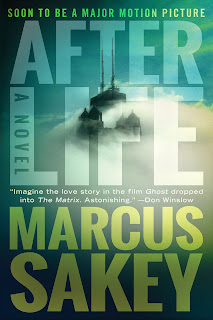 London, 1532: A boy with no conscience and no family has been doing anything he can to survive when he sees another boy leave a ship in the harbor. He takes the boy's place and is one of the remaining crew who resort to cannibalism when the ship is badly damaged. Then, he dies. But, he's not done, yet.

Present-day Chicago: FBI agent Will Brody searches for a killer who has already taken 17 lives. He also falls in love. Then, tragedy strikes. When Brody awakens in a world where his gun doesn't work and people are trying to kill him, he's confused. Then, he stops one of the killers and is faced with an entire band of people brandishing weapons. What is going on?

The title is apt: Afterlife is the story of what happens to Will Brody, and later Claire McCoy (his boss and lover), when they're killed and move on to an afterlife that exists in a sort of parallel dimension to what we know as life, one of many levels that overlay the living world. In this dimension, there is no electricity or other power source. Fire doesn't burn, phones don't function. But, the dead can obtain power from each other by killing. When Claire and the serial killer both die and enter this same afterlife, she is concerned and wants to take him out. But, there's a community of souls who have banded together to keep each other safe from the "Eaters", those who are hooked on the power gained from taking other lives. When it becomes clear that Claire's concerns were justified and the serial killer has become even more dangerous, can Claire, Brody, and the others find a way to stop him?

Afterlife is billed as "sci-fi" but it's hard to pin down. I have a little trouble with the sci-fi label. If Afterlife is sci-fi, so is Life After Life by Kate Atkinson, which I tend to think of as general fiction, a "What-if?" with historical backdrop, while Afterlife is similar in its creation of a world in which various lives are layered like a palimpsest but with police procedural and fantasy or paranormal aspects. What if there are different levels of afterlife for different types of death? What if there are still ways in which people can affect each other in this great beyond? And, what if doing so creates a damaging power structure? What if even the afterlife isn't the end?

Whew, lots to digest. But, the result is kind of a freaky fantasy world much like that of Joe Hill's N0S4A2, where bad souls are endowed with a dangerous power and the good must find a clever way to battle the bad and stop it from winning. If the bad wins, it could lead to an endless harvesting of souls as they arrive. The boy from London plays an interesting role that emerges toward the end of the novel but you'll just have to read it to find out where he comes in.

Recommended - A unique, surprising story that poses a fantasy of what might lie beyond our world and examines the idea that even those who appear to be horrible people might actually be good inside. The author then takes that concept and turns it into a wild ride with some gory fight scenes and a final battle between good and evil (plus a bit of travel between those post-life layers). All of this with a love story at its heart. Afterlife is a sometimes-violent rollercoaster and, in the end, satisfying. I loved the fact that you absolutely cannot predict what will happen from one moment to the next.

©2017 Nancy Horner. All rights reserved. If you are reading this post at a site other than Bookfoolery or its RSS feed, you are reading a stolen feed. Email bookfoolery@gmail.com for written permission to reproduce text or photos.
Posted by Bookfool at 9:32 AM