I'm going to skip today's Monday Malarkey post because I need to finish up my last two review posts and get started on my break. Monday Malarkey will return in September. 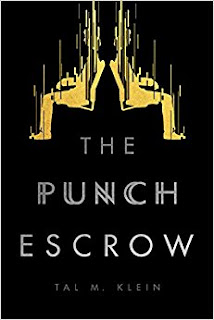 The Punch Escrow by Tal M. Klein is described on the cover as "hard science fiction". I didn't read that description till I was well into the book because I'll often skip reading synopses on book covers or flaps when I'm about to read a book, for fear of spoilers (yes, I have had books ruined by the cover description). So, by the point I read that, I'd already come to that conclusion on my own and was mentally searching for a comparison. The best I can come up with is The Martian. If you had no trouble reading between the lines (or just skimming) during the more technical portions of The Martian, you'll probably be just fine with The Punch Escrow. On to the storyline.

Joel Byram was on his way to Costa Rica in the year 2147. His wife Sylvia had already teleported to their vacation destination and he was following along when something went horribly wrong. Now, there are two Joel Byrams. One is in New York and the other in Costa Rica. The Joel in New York knows that his wife's employer, the owner and developer of teleportation devices all over the world, is trying to kill him because he has learned important information about teleportation that could ruin the business. The second Joel is slowly discovering the truth. When Joel's wife Sylvia is kidnapped, both Joels are determined to find and save her. But, will one Joel have to die to save Sylvia and the other Joel?

That's a serious simplification. A lot happens in The Punch Escrow - it's a wild ride - but the vast majority of the details are, I think, spoilers. So, I'll stick to generalities. The book takes place in the near future but is described in past tense, left as a message for people in Joel's future. At the beginning of the book, you meet the Joel in New York. A woman who works with Sylvia has helped Joel escape but now he's trapped by several people who claim to be travel agents. Clearly, they're not telling the truth, but is Joel in danger or are they trying to help him? What exactly happened that resulted in the creation of a second Joel? And, what has Sylvia been hiding from him?

Two separate groups object to the practice of teleportation in this future world. One is the members of the Levant (the region) and the other is a group called the Gehinnomites. I have to admit that I got those two muddled in my mind, a bit, but basically one objects on religious principles but I can't recall if the other does - they have similar objections. The religious objection is that humans are being literally taken apart at an astronomically small level in order to send them to their destination and then reassembled. Surely, no God meant for his creation to be disassembled and reassembled. The truth of teleportation, it turns out, is worse than that. But, you'll have to read the book to find out. It's really a fascinating concept but I can't bear the thought of ruining it for anyone.

Highly recommended, especially to science fiction lovers - The scientific descriptions are believable if, at times, hard to follow for the non-scientific mind. As in The Martian, The Punch Escrow is an adventurous book with a sense of humor that forces you to either really think or read between the lines. Sometimes, I confess, I got totally lost, but it usually didn't take long till I figured out what was going on. And, I had so much fun that I didn't mind the fact that I occasionally couldn't follow the science perfectly. There are a lot of Star-Trekkish aspects to this future world that are super fun, like a device much like the replicator in Star Trek, people-moving drones of various sizes, implanted apps, and self-driving cars with personalities. Joel's job is interesting, as well. He's a "salter", paid to confuse apps, and can do his job while walking around the city, since the implanted apps basically mean everyone is wired into a globalized computer system.

Much like The Martian, I loved the storyline - the idea of how teleportation works in this future world and its implications, the reluctant hero(es) vs. the villainous corporation, the fast-paced rush to the final life or death struggle, and the existential question that underscores it all. I also loved the fact that there are plenty of light, humorous moments. An entertaining read with a creative but plausible future world.

©2017 Nancy Horner. All rights reserved. If you are reading this post at a site other than Bookfoolery or its RSS feed, you are reading a stolen feed. Email bookfoolery@gmail.com for written permission to reproduce text or photos.
Posted by Bookfool at 3:30 PM