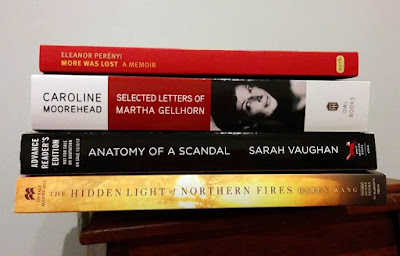 
Since I'm getting ready to take some time off from blogging (soon) and I've put myself on a limited book-buying ban, the arrivals should start to seriously trickle off. But, there will still be some coming in, now and then, since I've pre-ordered a few books. And, let's face it, this house is a book magnet.


A note on the title, thanks to those who wrote about it on Goodreads: The title comes from stage direction in Shakespeare's The Winter's Tale: "Exit. Pursued by a bear." I'm only halfway through the book but I've read enough, now, to understand it. The protagonist's name is Hermione Winters and while at cheerleading camp, she's drugged and raped. The bear that pursues her is the lingering struggle with the assault and her identity. She's wrestling with a metaphorical bear, in other words. In context, the name is incredibly clever, but I would probably have ignored the book because the title made no sense to me, had it not been recommended to me as a suggestion for my feminist reading project. Warning: This book will shred you. It's so emotional I lost all my eye makeup reading just the first half. And, Hermione has an incredible support system. Not everyone I know who's been raped has had support when needed. I can't begin to imagine how much worse it is for someone who is accused of making up a rape to cover for sexual activity by those she trusted (yes, that happened to a friend).

I've got another book that I plan to start, tonight, but I doubt I'll pick it up till I've finished Exit, Pursued by a Bear because I must know what happens to Hermione.

This weekend we went to a bird sanctuary off the Natchez Trace Parkway to practice shooting with my new zoom lens and, good grief, have I got some learning to do. It's a long lens and most of the other long lenses I've owned have required some adjustment to deal with the fact that they let in less light. This one is the opposite: more light sensitive, by far, than I'm accustomed to. So, most of the photos I took of white herons just blew out completely. Here's one that's not too embarrassing, although I may have overcompensated for the light problem (but the sky really was that dreary): 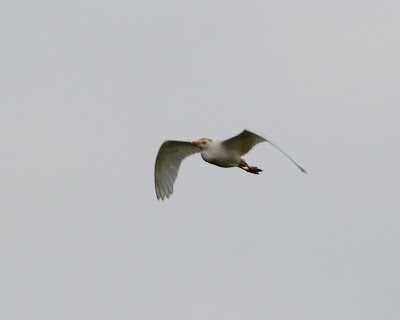 That was pretty much the excitement for the weekend. Happy early Independence Day to the Americans!


©2017 Nancy Horner. All rights reserved. If you are reading this post at a site other than Bookfoolery or its RSS feed, you are reading a stolen feed. Email bookfoolery@gmail.com for written permission to reproduce text or photos.
Posted by Bookfool at 7:08 PM