Just Fly Away by Andrew McCarthy 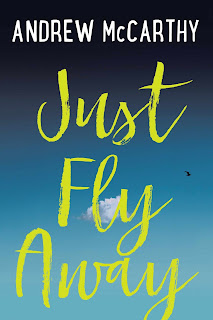 While I was taking a shower and trying not to get water all over the giant taped-up crack, I couldn't get out of my head the fact that my father had been in love with a tomato-eating blond when he was a thieving teenage bowler who had harbored secret dreams. Would I ever be able to look at a tomato the same way again? Or a bowling ball? Or even listen to B. Springsteen for that matter?

Just Fly Away is a Young Adult novel about a 15-year-old whose life is turned upside-down when she discovers her father has a child he's never mentioned. The fact that her half-brother is only 8 years old means her parents were married at the time of little Thomas's conception. Upset by her father's betrayal, Lucy begins to spend more time at a friend's house, where she falls for her friend's brother, Simon, and eventually seeks out little Thomas for reasons even she can't explain. But, knowing where he is and what he looks like is no help. When Lucy loses her temper and is rude even to Simon, who has been endlessly patient with her, she decides on the spur of the moment to run away.

It takes about 115 pages to get to the part where Lucy runs away and I think that is the book's biggest downfall because once she leaves New Jersey, Just Fly Away starts to really become interesting. Lucy is unsure where to go, at first, but then she remembers her paternal grandfather in Maine. She's only met him once but surely he'll be happy to see her.

At her destination, Lucy gets a fresh perspective on her family, the truth about her father's past, the way she's treated her boyfriend, and how to fit a new family member into her world. Meanwhile, she's enjoying the rugged Maine coast and getting to know her grandfather. But, then tragedy strikes and the lessons she's learned become even more crucial.

I bought Just Fly Away primarily because I so thoroughly enjoyed Andrew McCarthy's travel book, The Longest Way Home, when it came out in 2012. His travel writing is excellent and I presumed he would find a way to incorporate travel into his fiction. The first 115 pages were slow and full of teenage angst -- to the point that I had to sit back and think about how I would have felt if I found out my father had cheated and had a third child tucked away somewhere, just to keep myself going. It didn't take a lot of pondering to realize that I definitely would have been devastated and thrown into the same sort of emotional chaos Lucy experiences -- especially during the tender early teen years. That helped me stick out the slower parts in anticipation of the time when Lucy ran away.

I did think there were occasions when it was clear that the author was a male writing from the perspective of a female. It's hard to imagine any female never even mildly obsessing about her clothing, even when she's been wearing it for two days. If I were her, the first thing I'd do at Grandpa's? Look for the detergent and ask for money for a second outfit so she could get out of that stinky underwear. But, I liked the book enough, in the end, to give it 4 stars out of 5.

Recommended - The writing is a little simplistic; in trying to capture the teenage voice, at first I thought the author may have gone overboard. But, once I became accustomed to it, I thought the style worked. The second problem was that it took a long time before the story moved from "Confused teenage girl drifting away from her family and close to a boy" to "What will happen when she runs away?" When Lucy leaves town, that's when Just Fly Away becomes interesting, the pace picks up, an entertaining character is added, and the story veers into territory that the author clearly understands: how travel can clear one's mind and help a person come to resolution. While the first 1/3 is slow, it's definitely worth sticking out the slower beginning for the latter 2/3 of the book.

©2017 Nancy Horner. All rights reserved. If you are reading this post at a site other than Bookfoolery or its RSS feed, you are reading a stolen feed. Email bookfoolery@gmail.com for written permission to reproduce text or photos.
Posted by Bookfool at 11:33 AM

Email ThisBlogThis!Share to TwitterShare to FacebookShare to Pinterest
Labels: Algonquin Young Readers, Andrew McCarthy, recommended but not a favorite, YA