Mini reviews - On Tyranny by T. Snyder, Simon and the Homo Sapiens Agenda by Becky Albertalli

It's time to play a little catch-up and, since I've already reviewed almost all of the ARCs I've read, I'm going for mini reviews of those I have not. Afterlife by Marcus Sakey is the only remaining ARC I need to review and I'll give it a full post.

On Tyranny: Twenty Lessons from the Twentieth Century by Timothy Snyder is a book that is meant as a guide for how to behave with an authoritarian in power. While the author didn't mention our current American president by name a single time, he did refer to him on occasion in generic terms. Some examples of the "lessons":


Before I read On Tyranny, I read some reviews at Goodreads and discovered that it made a few readers burn with anger at the perceived comparison of our current president to the well-known German authoritarian who slaughtered 6 million + people. So, I was watching for direct comparisons. There are none. Not one. There may be comments about behaviors that the latter exhibited and the former is now also showing, but no claims that one is becoming the other. I watched an interview with the author (on video; unfortunately, I don't recall which organization it was that interviewed Snyder, but I expect there are a few available online) and he was pretty clear that comparing 45 to a specific tyrant was not his goal. I highly recommend looking up interviews with Snyder if you intend to read the book.

While not the easiest read, I thought Snyder had some excellent advice, offered from a purely historical perspective, and I plan to reread it soon to help solidify what I learned. It's a quick read, just 126 pages and the book is smaller than a mass market paperback.

Highly recommended to those concerned about today's political climate and certainly not limited to one or the other side. It does help if you take off your red- or blue-tinted lenses and try to remain neutral. Read it for a viewpoint colored by history, not politics. 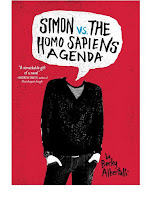 Simon vs. the Homo Sapiens Agenda by Becky Albertalli is the story of a teenager who has developed an email friendship with one of his classmates. He doesn't know who the classmate is; all he knows is that they're both gay and talking to the friend he calls "Blue" is helping him come to terms with his homosexuality. What he wants most is to find the strength to come out.

Unfortunately, a fellow by the name of Martin has gotten a peek into Simon's email account and now he's blackmailing Simon. If Simon won't help Martin get together with the girl Martin admires, he'll spill the beans about Simon's sexuality. Will Simon summon the courage to come out to more than an anonymous friend? Will Martin give away Simon's secret before he's ready? Who is Blue?

I loved absolutely everything about Simon vs. the Homo Sapiens Agenda. It's a good book that's well paced with a lot going on, great characters, a mystery (Who is Blue?) and high stakes. It's also a book that treats its characters and their emotions with tremendous respect.

Highly recommended - The timing was pretty awesome. I chose Simon, etc. because it was calling to me without considering the fact that I was starting a book with an LGBTQ character right as Gay Pride Month was beginning. It wasn't till I was in the middle of the book that the timing occurred to me. At any rate, it's a good read for any time of the year.


©2017 Nancy Horner. All rights reserved. If you are reading this post at a site other than Bookfoolery or its RSS feed, you are reading a stolen feed. Email bookfoolery@gmail.com for written permission to reproduce text or photos.
Posted by Bookfool at 3:32 PM