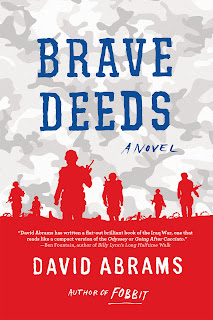 Everything was going fine. Smooth as a baby's shaved ass. Park at the wheel, Arrow riding shotgun, the rest of us crammed in the back: O sitting on Fish's lap, Cheever digging into his second bag of Doritos for the day, Drew sandwiched somewhere in the middle. Early morning locals in fluttering robes swished past the Humvee's small windows. Burnt shells of cars lined the curb, lingering memories of bombs. Billboards with soccer players saying things we couldn't understand, but offering us a Coke and a smile. Everything good and fine and then bang! It's like the Humvee decided it had had enough. Sorry, guys, I'm calling it quits. You're on your own from here.

~from p. 3 of ARC, Brave Deeds: Some changes may have been made to the final print version

Man . . . this just keeps happening. Three fabulous books in a row and every single time I'm frozen, thinking, "I'm not worthy to write about this." Let me just say the usual . . . I'll do my best.

Brave Deeds is set during the Iraq War and tells the story of six men whose Sergeant has been killed in an explosion. When they find out his memorial service is being held at a different Forward Operating Base than the one where they're stationed and that they're not allowed to attend, they steal a Humvee and set off for FOB Saro in defiance of their orders. Barely into their journey, the Humvee breaks down. They're in Baghdad, a dangerous place for American soldiers, so they quickly exit the vehicle. And, then -- too late -- they realize they've left behind both the radio and their maps. Brave Deeds is the story of their journey across Baghdad to honor the fallen hero they've come to admire and respect.

Much like the most recent addition to my all-time favorite war books list, A Walk in the Sun by Harry Brown, Brave Deeds is a compact gem that takes place in a short span of time (less than a day) during which you slowly become acquainted with a band of protagonists who are taking a long, uncertain walk, through both their current actions and flashbacks. In spite of the short time span that's covered, a lot happens. The 6 men are in a dangerous city, surrounded by potential hazards that include the heat, hunger, uncertainty about the correct direction in which to head, pain, fatigue, and frequent errors in judgment. Without a map to guide them or a radio to call for help, will they remember their training and find both their destination and the cunning to survive? If they make it to FOB Saro, will they arrive in time to attend the memorial service?

Highly recommended but not for the faint of heart - Brave Deeds is gritty and raw with the ring of truth, that "you were there," sensation that makes a story hit you right in the gut. I don't mind the violence and gore, the crude language (it's worth mentioning that Brave Deeds contains the two words I currently consider the most vile modern obscenities), the talk about sex and bodily functions, all because they're authentic. When people are in the worst possible situation, their thoughts go to the basics -- hunger, thirst, desire, love, hate, and the singular goal to reach their objective. Most importantly, though, the ending quite simply took my breath away. A deeply meaningful book about modern-day heroes, for better or worse, doing what they feel is right in order to show respect to one of their own. Brave Deeds is a 5-star, tightly-written, deeply meaningful story that will stick with me for a long time.

Oops! I just accidentally posted and then reverted to draft form because I completely forgot to mention that this will be my last post till sometime in September. As always, I plan to shut down Facebook and reduce my internet time to next to nothing, but I'll occasionally check my email. I can't say whether or not I'll manage to step away from Twitter, since I've recently become a Twitter addict. It's likely I'll mention what I'm reading, there. At any rate, I'll be back to blogging in roughly 5-6 weeks.

You've probably already seen this photo if you follow me elsewhere, but Izzy very helpfully posed with Brave Deeds while I was reading it and I'm crazy about this photo so I figure it's worth adding for posterity. Happy summer, everyone! 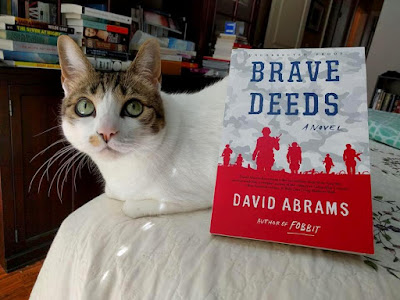 ©2017 Nancy Horner. All rights reserved. If you are reading this post at a site other than Bookfoolery or its RSS feed, you are reading a stolen feed. Email bookfoolery@gmail.com for written permission to reproduce text or photos.
Posted by Bookfool at 2:07 PM