The Hidden Light of Northern Fires by Daren Wang 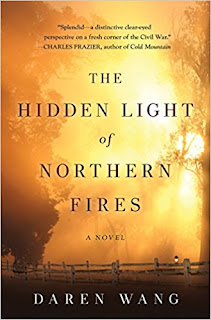 Joe Bell is close to one of his final stops on the Underground Railroad when he's discovered by two men in search of escaped slaves for the reward money. After Joe is badly hurt in a confrontation and injures one of his pursuers and a beloved dog, he makes his way to Mary's house.

Mary Willis is college-educated and has very liberal opinions for a young woman. She's been hiding escaped slaves in the family barn for some time when Joe shows up, injured and feverish. Because of his confrontation with the "copperheads" and the injuries they sustained, there are two very angry men who want to find Joe, not to mention his owner, Yates Bell. It will take special courage and subterfuge to nurse Joe back to health and help him escape to Canada.

Mary's brother, Leander, has never learned to accept responsibility. Expected to work on the family farm, instead he spends much of his time drinking and hanging out with friends at the shack he built. When he's sent to town to manage his father's lumber business, he is not particularly successful. Then he meets Isabel. His problems are compounded after she introduces him to opium and convinces him that she can help him make a fortune.

When war breaks out, the young men of Town Line all sign up for the army, led by Leander. Back home, Confederates are helped to escape to Canada, where they're able to regroup and return to war; and, Town Line becomes the only town in the Union to secede.

What will happen to Joe and Mary? Will Joe's lengthy stay get them both caught? When Leander joins the army, will he finally become disciplined? What will become of the many slaves who are escaping to the North when the people of Buffalo, New York begin to clash with them over concern that the influx of strangers will mean the loss of their jobs? Will the Confederates of Town Line be able to do serious damage to the Union?

That was quite a big synopsis because there are quite a few threads in The Hidden Light of Northern Fires. I skipped at least a couple of the subplots. At the beginning of the book, the story is almost exclusively about Mary, her part in the smuggling of slaves to Canada, and Joe. I'd say at least 1/3 of the book is primarily about them, although there is a bit of set-up regarding Joe's owner, Yates, and Harry, the man whose dog is killed.

But, as The Hidden Light of Northern Fires progresses, the number of different threads grows. Some, I didn't fully understand. Why, for example, does Isabel choose to have Leander join her posh but drug-addled life? What is her purpose? Did she plan to just use and discard him?

There were also some characters who disappeared early on and reappeared toward the end of the book. One writes letters home but is otherwise not spoken of till his return.

At the beginning, I could barely stand to put down The Hidden Light of Northern Fires. I liked Mary, her father Nathan, Joe, and Charles (a family friend). I cared about what would happen to them. Leander was simply a wastrel - the Branwell Brontë of the Willis family. Henry is a dubious character. I never knew quite whether to love or hate him. And, there are a number of simply despicable people - a parson who doesn't mind helping the Confederate escapees who go through and finds ways to get free labor and easy money, a Marshall without a conscience, a Confederate spy who is not past cheating the people he lures into "business".

Eventually, the quantity of violent characters and the body count started to wear on me. The book centers on some historical events, like the secession of the town, the riot between Irish dock workers and freed slaves, and the secret connections that helped both Confederates and escaped slaves make their way to Canada. Those were interesting but the violence tired me and by the last third of the book, I began to just want to get the reading over with.

Recommended? Not recommended? I just don't know. I loved both the beginning and ending. I liked the setting and the fact that I learned something new (that there was a single city in the North that seceded from the Union). I liked the fact that two of the characters who appeared unredeemable actually turned out okay in the end. And, I liked the overall storyline until that last 1/3 or so. But, I found the last 75-100 pages utterly exhausting because of the violence and the sheer quantity of nasty characters. I rated the book 3.5/5 and have considered knocking it down to 3 stars, which would be an average read. But, The Hidden Light of Northern Fires was so promising in the beginning, grabbed me so hard, and ended well enough that I'm not sure I can talk myself into penalizing it too much for the parts I disliked.

©2017 Nancy Horner. All rights reserved. If you are reading this post at a site other than Bookfoolery or its RSS feed, you are reading a stolen feed. Email bookfoolery@gmail.com for written permission to reproduce text or photos.
Posted by Bookfool at 7:28 PM