Goodnight from London by Jennifer Robson 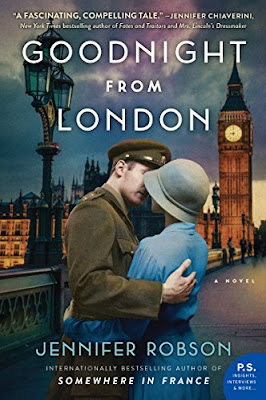 Ruby Sutton has only been working for The American, a weekly newspaper, for 6 months when she's offered a surprising chance that she can't possibly pass up: a job working for Picture Weekly in London. It's 1940 and the editor of Picture Weekly is interested in hiring an American reporter to add to his team. Ruby is the only reporter at The American with no family to leave behind. Her editor also is impressed with her writing skill.

Ruby is young and her turbulent past is not far behind her. She is thrilled to be in a new place with a fulfilling job and new friends, including a handsome and mysterious British officer, Captain Bennett, who frequently disappears to do secretive work for the government. London is dangerous and there are hardships she would have escaped, had she stayed home. But, Ruby quickly adapts. What will happen to Ruby and her friends as war drags on? Who will survive and who will become a casualty of war?

I've been struggling with how to share my thoughts about Goodnight from London because I don't want to be too negative about it but it did have some flaws - flaws, I should add, that I was willing to overlook because I simply enjoyed the sense of time and place enough that I desired to brush aside anything about the book that I disliked. Having said that, let's talk about the good and the bad.

What I liked about Goodnight from London:

Besides the descriptions of London, which I found very easy to visualize, I thought it was pretty clear that Jennifer Robson is an excellent researcher. She was meticulous about the WWII timeline and I even learned a few new things. For example, I'd never heard of the Durning Road Disaster in Liverpool - one of the places Ruby is sent to write about. And, I've been collecting books about WWII for eons but wasn't aware of Martha Gellhorn's writing. Really, that's quite a surprising oversight, when I think about it. I thought it was also pretty clear that she'd carefully studied which parts of London were bombed and when during the Blitz. So, the setting was very competently handled.

What I disliked about Goodnight from London:

In truth, there were only two things that really jumped out at me. One was that everything seemed far too easy for Ruby. I don't want to spoil anything so I'll try to keep it as generic as possible, but from the beginning of the book, when she's asked to take a job that anyone would jump at (who wouldn't want a plum writing position in London?) and she's chosen because she lacks a family and is just a naturally brilliant writer? Too much of a stretch. But, I understood this as set-up for the story, so I chose to just shrug it off and continue. And, then Ruby was picked up at the train station by a dashing man who clearly was instantly attracted to her.  This pattern continued. Some bad things happened but absolutely everything was far too easy for Ruby.

The second thing was a petty conversational quirk that almost all of the characters shared. Most readers probably won't even notice that; I have to work hard to get the editing portion of my brain to shut off, though, so it was slightly annoying.

Recommended - I still loved this book, flaws and all. It didn't matter that much of it was predictable, that everything seemed just a little too easy for Ruby, that almost everyone instantly loved her and she seemed far too perfect or even that the worst thing that happened to her was easily overcome because of her connections. I still enjoyed it immensely and absolutely loved the ending. Sometimes predictability can be a good thing and, in this case, the ending was very predictable but in a good way. Recommended to historical fiction fans, especially those who enjoy a WWII setting, and hopeless romantics.

©2017 Nancy Horner. All rights reserved. If you are reading this post at a site other than Bookfoolery or its RSS feed, you are reading a stolen feed. Email bookfoolery@gmail.com for written permission to reproduce text or photos.
Posted by Bookfool at 8:24 PM