The Day I Died by Lori Rader-Day 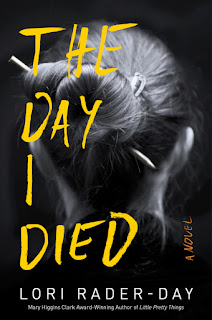 Anna Winger has a special skill, reading people through their handwriting. Most of the time, she uses her skill to help companies looking for trustworthy employees or finding hints about whether or not someone should commit to a romantic interest. She has enough of her own problems and likes to maintain a quiet life, moving from one town to another if she feels threatened.

When a boy goes missing and a woman is murdered, the local sheriff is torn. He thinks Anna's skill is a crock but he needs help figuring out who wrote the ransom note and what they have in mind. And, he makes both clear to Anna. But, Anna knows her own mind and isn't afraid of the small-town sheriff and his doubts. With the help of the sheriff's secretary, Anna begins to search for the truth while keeping an eye out for hints that her past may be catching up with her and dealing with the frustrations of life with a teenager.

After her son disappears, the search widens. Are the two disappearances connected or is her son simply in search of his own past? What happened to Anna that keeps her running? And, what will happen when she has no choice but to face her own mistakes?

Oh, boy. Lots to unpack, here. It's been two months since I read The Day I Died but I have no trouble remembering it at all, which is obviously a mark in its favor. I did find that there was a point the book started to lose my interest but I liked the fact that there was so much going on and when it came time to weigh the decision about whether or not to continue, I decided it was a no brainer. I wanted to know the answers and it was worth wading through the slower portion of the book to get to them. While I didn't think Anna's past was all that earth-shattering - certainly not enough to keep her running from one town to another - it was interesting enough to keep me from feeling like I'd been needlessly dangled, and I did like the denouement of the story, especially the way one particular thread came together.

The only big problem I had with the book was that Anna was so distracted by her past that at times she was completely blind to what was right before her eyes (verging on the "too stupid to live" concept). There were some pretty blatant hints and she made a stupid choice or two. But, in the end I enjoyed the way the book was wrapped up enough that I felt like the conclusion helped overcome some of the bumps on the path to getting there.

Recommended - I would not call The Day I Died a thriller or suspense so much as a novel including a light mystery with an unusual twist. Because the story was told through the eyes of a handwriting analyst, it was as much about the protagonist's life - it's a bit angst-ridden - as it was about finding a missing child, and later two missing children. I liked The Day I Died for the uniqueness, the hint of romance that doesn't dominate the story, and the satisfying ending.


©2017 Nancy Horner. All rights reserved. If you are reading this post at a site other than Bookfoolery  or its RSS feed, you are reading a stolen feed. Email bookfoolery@gmail.com for written permission to reproduce text or photos.
Posted by Bookfool at 12:15 PM

Email ThisBlogThis!Share to TwitterShare to FacebookShare to Pinterest
Labels: a hint of mystery, a touch of romance, Lori Rader-Day