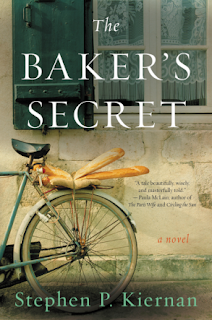 Emma (short for Emmanuelle) is a young baker living in Normandy. When the invading Nazis tell her she must cook 12 baguettes of bread, each day, she complies but cleverly adds an extra ingredient to stretch the food a little farther. The two extra loaves she's able to make will help keep villagers alive. Eventually, she discovers that she has other skills. But, every time she adds that secret ingredient to her flour and every day that she continues to help the villagers acquire what they need, she endangers her own life. While Emma grows hard from the war and tells everyone that the Allies will never arrive, somewhere inside her is a beating heart. Will Emma survive the dangers she places herself in? Who will live and who will die in Vergers? Will the love of her life return and help to soften a heart hardened by years of hardship and loss?

The Baker's Secret doesn't contain specific dates till nearly the end of the book but the passage of time, the deprivation of life under an invading army, and the daily terror are made perfectly clear. The village of Vergers in Normandy is the setting, near the ocean and beaches where D-Day took place on June 6, 1944.

Recommended - I had a little trouble liking the main character of The Baker's Secret; but while I disliked Emma's refusal to embrace hope (which I admit could be easily defended as a survival mechanism), I admired her determination and resourcefulness and cared about what happened to her and the other villagers. The final scenes that take place on D-Day are particularly tense and moving.

It's truly serendipitous that I finished the reading of The Baker's Secret on the day before the anniversary of D-Day. The fact that photographs and news stories about the anniversary are everywhere has given the story an extra dimension. I've saved a few but this photo taken on D-Day in Vierville, France looks closest to how I'd expect Vergers to look: 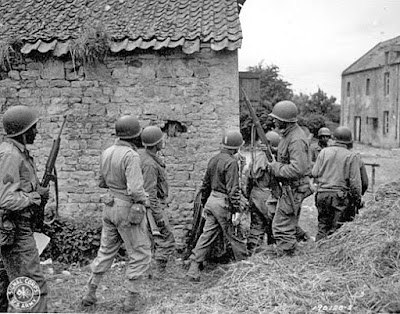 Side note:  I didn't realize I'd read another book by this author till I began to write my blog post about it. That earlier book, The Curiosity, was one I harshly criticized. This one is dramatically better. I have a feeling I'll be thinking about Emma, her grandmother, The Goat, and the rest of the characters and their story for a long time. Well done, Mr. Kiernan.

And, another thing: I always feel like this is secondary to acknowledging the anniversary of D-Day, but today is my 11th bloggiversary. *Blows out imaginary candles*

©2017 Nancy Horner. All rights reserved. If you are reading this post at a site other than Bookfoolery  or its RSS feed, you are reading a stolen feed. Email bookfoolery@gmail.com for written permission to reproduce text or photos.
Posted by Bookfool at 1:50 PM