The Legion of Regrettable Supervillains by Jon Morris 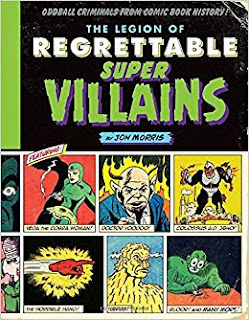 They say you should dress for the job you want, not the job you have. If the intergalactic Dr. Voodoo is following that advice, it's difficult to say what job he's aiming for. Clad in tuxedo and tails, he seems more prepared for a career as a maitre d' or a cartoon mayor than as the servant of an ever-living goddess of evil.

When Lilith's planet -- also called Lilith -- is destroyed in a battle with Wonder Man, Dr. Voodoo searches for a new seat of the empire. But the queen of evil considers Earth her rightful domain. Harried and henpecked, Voodoo has no choice but to comply.

Dr. Voodoo and his allies disappeared from Wonder Man's ongoing narrative, though the hero's saga continued for a few more issues. Perhaps Voodoo was marshaling his anthozoons when he should have been recharging his frigitrons for another attack on Earth's peaceful cosmoplanes.

I'll have to take an interior shot of The Legion of Regrettable Supervillains by Jon Morris (page down . . . it'll be here, by the time I post this review) because a view of one spread gives you a pretty good idea of what you're in for when you open the book.

With a sly sense of humor, author Jon Morris describes various villains, which hero was the villain's enemy, where and when the character appeared and what happened to him (some of them appear and then simply fade away, some are quickly dispatched, some bumble around practically asking to be exterminated).

Beginning with The Golden Age, from 1938-1949, The Legion of Regrettable Supervillains describes a time period, progressing forward, and then goes into details about various villains. Occasionally, there will be a spread with interior shots from one of the comic books (they're readable, thank goodness), and sometimes a spread will contain brief blurbs about 5 or 6 supervillains who bore similarities to those who are described in greater detail. The result is a book that gives you a good sense of the historical perspective in which the books were written (so many Hitler-like villains in the years before and after WWII) as well as a broad look at a variety of villains, some of whom were clearly more regrettable than others.

Interior shot! Hopefully, you'll be able to enlarge it for a better view. 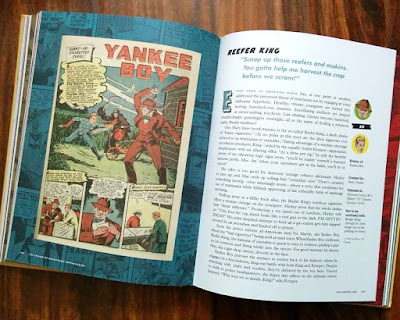 Highly recommended - Comic fans, in particular, will enjoy this book but I'm not exactly what you could call a comic fangirl and I thought the book was a total delight. I read it slowly, maybe 10 villains per night, and found it immensely entertaining. It's the kind of book you can't shut up about. While I was reading, I'd read excerpts to my husband or tell him some funny little factoid about a supervillain, read one of the humorous side notes written by the author (on the supervillain Colossus: "Earth shirt size XXXXXXXXXXXXXXXXL"). Loads of fun and would make a great gift as it is one freaking gorgeous book.

©2017 Nancy Horner. All rights reserved. If you are reading this post at a site other than Bookfoolery  or its RSS feed, you are reading a stolen feed. Email bookfoolery@gmail.com for written permission to reproduce text or photos.
Posted by Bookfool at 3:15 PM