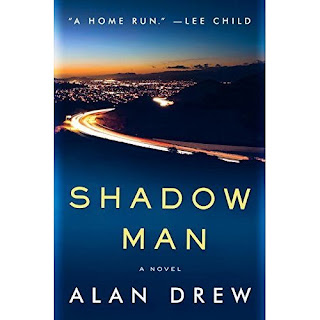 Rancho Santa Elena in the 1980s is a quiet town where residents leave their doors unlocked and their windows open. Violent crime is almost unheard of. But, a serial killer has arrived. Detective Ben Wade moved to Santa Elena to try to save his marriage but failed. Now, he's faced with the kind of crime he left behind; and, he's determined to stop the serial killer. At the crime scenes, he can't help but think of his ex-wife and daughter. Aided by medical examiner Natasha Betencourt, Ben begins the search. But, when a possible suicide appears in a strawberry field, Ben is thrown off course by his own dark secret. How many will die before the serial killer is found?

I am not a fan of crime novels, in general, but I like to break up my reading pattern on occasion by throwing something unusual into the mix. And, that's how I ended up reading Shadow Man. At first, I wasn't sure I'd be able to get through the book. There are only brief forays into the mind of the killer but he's obviously twisted and both they and the scenes in which he kills are very difficult to read. I don't find murder entertaining; that's why I avoid crime - both fiction and nonfiction. But, I found Ben Wade so compelling that I simply could not put the book down. I also loved the 1980s California setting. It's not a place I know, but anyone who lived through that time period can relate to the horror of widespread construction destroying the beauty of the land.

It's also worth noting that while there is a serial killer being hunted, the secondary storyline relating to the protagonist keeps it from being merely a book about catching a serial killer. What is the secret that Ben has kept hidden for over 15 years? And, how might it change the investigation into the single murder that doesn't fit the serial killer's profile? Did the serial killer change his habits, briefly, or was the death just what it appears: a suicide?

Highly recommended - At times, you may need to skim if you don't have a strong stomach or murder scenes bother you. I did occasionally pick up the pace deliberately. But, Shadow Man is an excellent read and I'm glad I briefly stepped outside my comfort zone.


©2017 Nancy Horner. All rights reserved. If you are reading this post at a site other than Bookfoolery  or its RSS feed, you are reading a stolen feed. Email bookfoolery@gmail.com for written permission to reproduce text or photos.
Posted by Bookfool at 10:26 PM