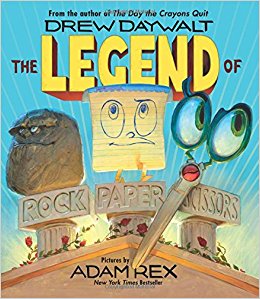 Long ago,
in an ancient and distant realm called
the Kingdom of Backyard,
there lived a warrior named
ROCK.
Rock was the strongest in
all the land, but he was
sad because no one could
give him a worthy challenge.

So begins The Legend of Rock Paper Scissors by Drew Daywalt and Adam Rex, the only book in this tremendous pile I've been reviewing that I actually purchased with real money. I bought The Legend of Rock Paper Scissors after reading (somewhere - who knows where) that it was "hilarious". I'm always up for anything that makes me smile - and I guess I was in one of those weak moods that happen roughly weekly, these days - so I got online and bought it on a whim.

And, sure enough, it's every bit as fun as advertised by . . . whoever. Rock is sad because he has found no worthy adversaries, so he goes in search of a challenge. First he comes to a clothesline, where he "met a warrior who hung on a rope, holding a giant's underwear": a clothespin. Rock tells Clothespin to drop that underwear and fight. Clothespin says he'll pinch Rock and make him cry. But, of course, Rock wins. Next, he challenges an apricot.

Elsewhere, a piec of paper is enduring the same horror. Nobody can outwit Paper. He jams a printer and frightens off a half-eaten bag of trail mix by throwing his shade on the nuts and raisins. Meanwhile, Scissors is experiencing the same challenge, first defeating a roll of tape and then dinosaur-shaped chicken nuggets.

Of course, they finally meet and the outcome is predictable. And, now we all know the origin of the "joyous struggle [that] still rages on to this very day."

Highly recommended - Large, vibrant, glorious illustrations that are both expressive and action-packed make The Legend of Rock Paper Scissors a visual feast and theatrical text makes for a perfect opportunity to polish off your ability to read using a variety of dramatic voices. Money well spent. It would be even better spent if there was a child around. Warning: Dramatic voices tend to frighten cats out of the room. So, you know, if all you have is a cat to read to, you might want to tone down the volume.

©2017 Nancy Horner. All rights reserved. If you are reading this post at a site other than Bookfoolery  or its RSS feed, you are reading a stolen feed. Email bookfoolery@gmail.com for written permission to reproduce text or photos.
Posted by Bookfool at 11:28 AM