It's been two weeks since a Monday Malarkey post, so there's a lot of catch-up in this one but don't worry; it's not all that long. 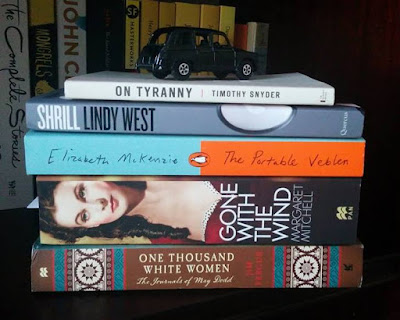 
Two of those were impulse purchases, although I'd been considering one for a while. On Tyranny had been on my radar but just obliquely and then I started paying closer attention to books about politics. I've been seeing a lot of political books that piqued my interest, lately, and I figured On Tyranny would be a good place to start, although I bought it in an impulsive moment. Shrill was one of many books on a list of feminist titles I've gathered and I needed to find something for this month's feminist read. The Portable Veblen has been on my wish list since before it was released and when a friend mentioned that the e-book was on sale, I considered buying the e-book but decided the price for the paperback was good enough that I might as well buy that, instead. I'm far more likely to actually read it, after all. Gone With the Wind is a replacement for the copy I began reading last year, which almost immediately began to fall apart in my hands. And, One Thousand White Women was my second impulse purchase, bought after I saw an ad for the follow-up novel on Shelf Awareness and looked up the original book.

If I end up broke in a ditch under a haphazard shelter made from books, you'll know why. Also, in case you're wondering, the London taxi on top of the pile is there to hold down the cover of On Tyranny, which I've already read. It didn't look attractive with the cover bowing upward.


Nothing, actually, although there are several books I have my eye on. I just finished The Baker's Secret and will probably start reading my feminist title and the classic I have set aside, The Winter of Our Discontent by John Steinbeck. I also need to get back to Hope in the Dark by Rebecca Solnit and have a middle grade book that I want to start soon, if not right away.


We had a free channel weekend and found a couple of excellent movies.

Next Stop Wonderland (1998) says it's a "romantic comedy" on the movie poster, at left, and it's funny. But, over 90% of the movie is more "two ships that pass in the night" than romance. Erin is ditched by her live-in boyfriend (played by Philip Seymour Hoffman) at the beginning of the movie. When her mother places an ad in the personals, Erin goes out on a number of trial dates, all the while almost running into Alan, who is clearly perfect for her. Alan is struggling to make ends meet while studying to better his life. You know they'll eventually meet and it will be magical, but since it doesn't happen till about the last 10 minutes of the movie, I can see why some people were frustrated and gave it low ratings. Huzzybuns and I found it surprisingly fun.  I gave it a mental rating of 9/10 and Huz said it was an 8 or 9 for him, which is  shockingly high for him. He's a harsh critic.

The Angriest Man in Brooklyn (2014) is about Henry Altmann, a man who was happy till recently but has become a very angry man since tragedy struck. When he's told he has a brain aneurysm and only 90 minutes to live, he tries to hurriedly reconcile with his family in the remaining hour-and-a-half he believes he has to live but spends most of that time utterly failing at his goal because his anger has distanced him from all the important people in his life. Meanwhile, the doctor who gave him that diagnosis only said 90 minutes because Henry was yelling in her face. She certainly didn't expect him to slip away before she could get him admitted to the hospital. Knowing he could drop dead at any minute, the doctor goes in search of her missing patient.

I wasn't sure I was going to like this movie because you have to sit through a lot of Robin Williams blowing his top and people ignoring him and the doctor going nuts trying to find him before their paths finally intersect, but in the end it was a lovely story and it rained in the living room. Or something. My face got wet.

That's about all! I'm pretty happy with both my reading and blog posting for the past two weeks. How about yourself?

©2017 Nancy Horner. All rights reserved. If you are reading this post at a site other than Bookfoolery  or its RSS feed, you are reading a stolen feed. Email bookfoolery@gmail.com for written permission to reproduce text or photos.
Posted by Bookfool at 6:25 PM