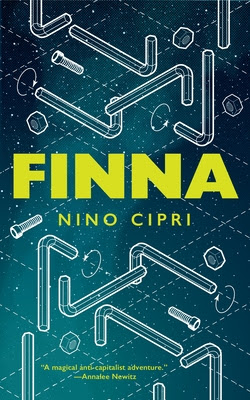 It's kind of a funny story how I ended up with this book. I read a review about a book of poetry with the exact same title, complete with a sample of the poetry, which I loved. I mean, I loved that poem so much I immediately got online and ordered the book. Then, it arrived and I discovered that I did not have a book of poetry but a sci-fi published by Tor. Well . . . I like sci-fi, so that wasn't going to kill me and I read it. I've ordered the poetry book, now, incidentally. I can't wait to read it.

Finna by Nino Cipri is another multiverse book but it's totally different from the one I reviewed, yesterday: The City We Became by N. K. Jemisin. Finna takes place in a store that's similar to an IKEA but with crazy room designs rather than sleek, Swedish modern furnishings. It also happens to have a portal that leads to other worlds. Occasionally the wormhole will open up and someone will wander into this multiverse. There used to be a team of people who were charged with rescuing customers who accidentally walked from one world to another, but they were disbanded by corporate and now the boss just chooses a couple random, minimum-wage employees to risk their lives using the Finna, a device that helps them find the missing customer.

Ava and Jules used to be a couple but they've broken up. Ava is trying to avoid Jules completely but she's called in to work on a day that Jules is also working. When an elderly lady goes missing and Ava discovers that the wormhole has opened, Ava and Jules are chosen to rescue her.

I wrote a review about Finna at Goodreads and apparently didn't save it so I'm just having to go by memory but I think what's most interesting about Finna is that while it's set in a multiverse and there are some interesting scenes because of that, I thought the book was as much about the relationship as the action.

I confess to finding the relationship a little confusing at first because Jules is gay trans (nonbinary, I think) and goes by "they" instead of he or she. This was my first time reading the use of "they, them," etc. to describe an individual. Since there were two characters searching for the missing woman in the multiverse, "they" often could refer to the two as a former couple or as a pair of people working together and I would have to halt, briefly, to figure it out. But, I liked the viewpoint of seeing this very different type of couple struggling with the same things that wreck other relationships with the added complication of prejudice from the boss and customers.

Will they be able to find the missing woman? Will they survive their search in the dangerous multiverse? If they do survive, will Ava and Jules be able to move forward and become friends?

Recommended - A serendipitous purchase, Finna has been accused of being too much like a couple other books and I can see why people draw those parallels, especially to Horrorstör. I found that because of the emphasis on the relationship and the fact that the store was unique in the naming of the room styles, its uniquenesses outweighed the multiverse in an IKEA-like store framing. I also appreciated reading about a kind of couple I've never read about before. Expanding the old horizons is a favorite thing.

One small warning: it can get a little bit gory at times. I'm surprised I didn't have nightmares after reading Finna.


©2020 Nancy Horner. All rights reserved. If you are reading this post at a site other than Bookfoolery or its RSS feed, you are reading a stolen feed. Email bookfoolery@gmail.com for written permission to reproduce text or photos.
Posted by Bookfool at 1:30 PM