A Castle in the Clouds by Kerstin Gier 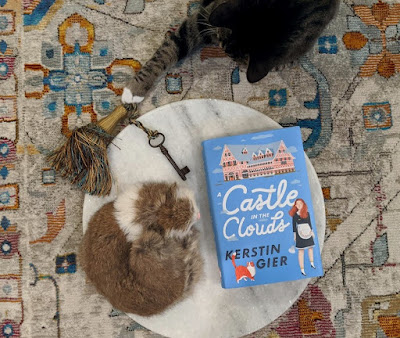 Confession: I bought A Castle in the Clouds by Kerstin Gier mainly because I liked the cover, particularly the fact that there's a cat on the cover. I almost removed it from my shopping cart but the cat threw me over the edge (and the story sounded fun, anyway).

A Castle in the Clouds is about a German teenage high school dropout named Sophie Spark who works at an aging, upscale hotel in the Swiss Alps as an intern. Not much happens in the first third to half of the book, other than the introduction of a very large cast as the reader gets to know Sophie, beginning with her interaction with an obnoxiously witty 9-year-old regular patron. You see her everyday life and learn about the mysterious "forbidden" cat who manages not to be seen by the bad-tempered one of the two co-owners.

There's a love triangle but it's a little odd. One of the teenage boys is the son of one of the hotel owners (it's a family-run hotel), the other has a grandfather in the jewelry business and a knack for climbing the outer hotel walls and sneaking through windows. Is he a thief? One of the families visiting and planning to attend the annual New Year's Ball is headed by a Russian oligarch who is going incognito. Is the oligarch up to no good?

You know something interesting is going to eventually happen because there's a prologue in which Sophie is covered in blood. But, the book is generally understated, a little everyday, and very fluffy. It's more about Sophie wondering what could be happening and getting it wrong, her odd little quirks like naming the birds that perch on her window ledge, and the two handsome young men circling her. The mystery is weak. I liked it that way, myself.

Highly recommended - I've never read Kerstin Gier and at the time I picked it up, I'd just read something a little too heavy that was getting me down. So, a fluffy read was exactly what I needed. I found A Castle in the Clouds light, a little adventurous, and humorous with a likable heroine. And, I loved the forbidden cat. The mystery is admittedly not that great and that's fine with me, since I'm no longer a big mystery fan. I was hoping for a light read and that's what I got. So, don't go into the reading of A Castle in the Clouds expecting a complex mystery. While it kept me guessing, A Castle in the Clouds is not the kind of book that mystery lovers tend to appreciate. I thought of it more as a love triangle YA with a little excitement on the side. Because A Castle in the Clouds was the perfect book for me at that moment, I gave it 5 stars.

Translated from the German.

©2020 Nancy Horner. All rights reserved. If you are reading this post at a site other than Bookfoolery or its RSS feed, you are reading a stolen feed. Email bookfoolery@gmail.com for written permission to reproduce text or photos.
Posted by Bookfool at 10:20 PM