They Called Us Enemy - George Takei, Elsinger, Scott, and Becker 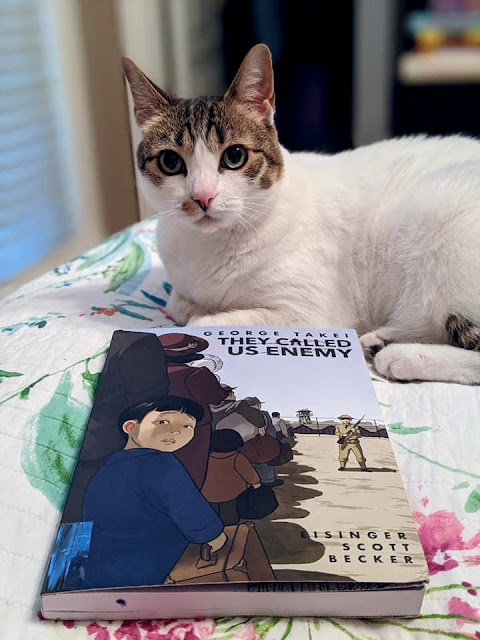 They Called Us Enemy is George Takei's graphic novel about his family's time in two separate internment camps during WWII. It tells a little about his life before the bombing of Pearl Harbor and how sentiment turned against Japanese Americans, the signing of the bill that led to the imprisonment of both American citizens and those who had been residents of the US for a long time without becoming citizens, how traumatic leaving their home was, the conditions they lived in at the camps, and how people banded together to make their lives more tolerable.

Takei talks a little about how this experience fed into the kind of escapism and pretend that led to his acting career and how this story was told as a play.

Highly recommended - I'm not a big fan of graphic memoirs but this one is excellent and very moving. It has very clear illustrations and text. My distaste for graphic memoirs is two-fold: sometimes people seem to share a little too much for my taste (a little harder to ignore if there are illustrations) and I don't always understand what's happening. There was never a point that I didn't understand what was going on in They Called Us Enemy. It's very well done. I thought Takei's story was also fascinating for the fact that his story was a little different than the other tales of Japanese Internment I've read because his parents made the choice not to sign a document saying they rejected the Emperor of Japan, due to the wording. That put them in much worse circumstances, for a time.


©2020 Nancy Horner. All rights reserved. If you are reading this post at a site other than Bookfoolery or its RSS feed, you are reading a stolen feed. Email bookfoolery@gmail.com for written permission to reproduce text or photos.
Posted by Bookfool at 12:48 PM