The Plains by Gerald Murnane 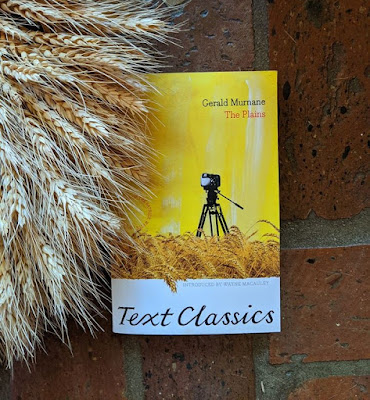 The Plains by Gerald Murnane is an Australian modern classic about a man who goes to the Plains region of Australia for a filmmaking project. But, first, he must get to know the Plainsmen and what makes them tick. He finds a patron, a wealthy landowner willing to pay him to spend time reading diaries and documents on the Plains to research his film.

~~~Warning: This next paragraph may contain spoilers. Skip it if you are planning to read The Plains and want to be surprised, please!~~~

The storyline in The Plains is predictable, at least in part, but still managed to surprise and tickle me. It's told in three parts. In the first part, the narrator travels to the Plains and hangs out where the Plainsmen do, hoping to learn about them and understand them enough to create his film. At the end of the first section, he finds his patron. In the second part, the narrator (I don't recall whether or not he was ever named) is living with his patron, admiring the patron's wife, and spending most of his time in the library of the patron's estate. In the final section, years have passed and the narrator realizes he has become a Plainsman, himself. But, I won't tell you what happens to his filmmaking process because it's worth discovering if you're at all interested in reading the book. And, it's quite funny.

I got of whiff of the slyness of the author's sense of humor when the narrator made a comment about not knowing quite when he left Australia. That's like saying you aren't quite sure when you left America as you entered Kansas. But, I think it's likely I would have missed out on a lot of the subtle humor if I hadn't read the introduction, which was written by a writer who was so impressed by The Plains when he first read it that he started corresponding with the author. I highly recommend reading the intro, if you have this copy of the book.

I found the beginning and the last section of The Plains a little difficult until I stopped thinking so hard about what the author was trying to say. Oddly, The Plains made more sense when I put less effort into figuring it out.

Recommended with a note - The Plains is a very Australian book and you have to kind of shift your mindset to get it if you're not Australian. It's best to embrace the quirkiness. It's not often I read a book that's more difficult the harder you try to understand it but this is definitely that kind of book.

Side note: The Plains caught my eye in an Australian bookstore because I grew up on the American Plains and have a fondness for wheat, which would get blown into our yard during storms when I was young; there was a wheat field not far from us at the time (it eventually became a Walmart, ugh). I didn't buy a copy when I was in Australia but my husband went back there on business, after we vacationed Down Under, and I sent him with a list. The Plains was at the top. He tried to read it and found it a little too weird.

©2020 Nancy Horner. All rights reserved. If you are reading this post at a site other than Bookfoolery or its RSS feed, you are reading a stolen feed. Email bookfoolery@gmail.com for written permission to reproduce text or photos.
Posted by Bookfool at 12:55 PM