Too Much and Never Enough by Mary L. Trump 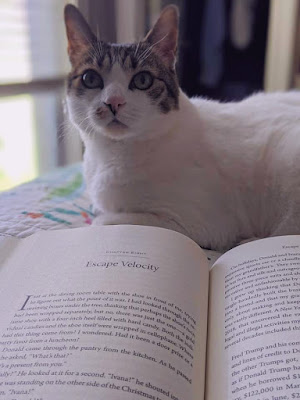 I pre-ordered Too Much and Never Enough by Mary L. Trump, the current president's niece, and then waffled over whether or not to cancel the order because I've been reading about him since the 1980s. I figured I'd already know most of what she had to say. As it turned out, I was correct in some ways but not others. Too Much and Never Enough is more of a family history than a book specifically about the president, although the author explains very nicely the reasoning for his behavior in a way that others have only guessed at. So, it's marginally different from the other psychological assessments (Mary Trump is a psychologist) and explains his actions more broadly by digging into how his domineering father and absent mother formed him into the man he is today.

It was fascinating reading about the family history because Too Much and Never Enough went deeper into the dysfunction of the family than I've ever read about in any article and made sense of many things that were a little fuzzy on detail. I knew, for example, that the president's eldest brother was an alcoholic, that he died fairly young, and that the president cut off the insurance for Freddy's family members at some point in time. I didn't know much beyond that; and, the story of Freddy Trump is much, much sadder than I realized.

At any rate, I don't want to go into too much detail but there were some little bits and pieces that I found of interest. For example, I was aware that the president was not being honest when he referred to himself as a self-made man and said he'd gotten "just a million dollars" from his fabulously wealthy and controlling father. But, I didn't realize that he pretty much lived off his father's money and was allowed to spend extravagantly because he was, after Freddy failed to live up to expectations, the chosen son. Nor did I know that he was really only the publicity man and the face of the family business while his father was alive. Too Much and Never Enough also nicely explains how and why Freddy fell from grace and the president took his place, as well as why the president was held up as a success by his family and the press, even when he wasn't actually making business decisions and, later, after he'd failed so thoroughly at his own ventures that the only banks that would loan to him were outside of the country.

The author does a good job of laying out the growth of the family's wealth and how they are all about money and power. She vaguely describes their tax evasion; talks about how they've used political and mob connections to their advantage; and, describes their decadent spending contrasted with cheapness in buying gifts (often regifting unwanted items or giving items that were wholly inappropriate to each other).

There's also this paragraph, a portion of which a friend on Facebook posted and I went to look up (I'd forgotten all about it):

While thousands of Americans die alone, Donald touts stock market gains. As my father lay dying alone, Donald went to the movies. If he can in any way profit from your death, he'll facilitate it, and then he'll ignore the fact that you died.

Recommended - Too Much and Never Enough was much better written and more informative than I expected, if a little uneven, as it jumped back and forth in time. But I can't say I enjoyed the reading because the family is described as such a greedy and vicious bunch (the kind of people who spend a holiday together making cutting remarks about each other, except the favored child, to whom praise is expected from everyone) that I was sick of them by the time I was halfway through the book. Still, I think it's worth the read and I have no regrets.


©2020 Nancy Horner. All rights reserved. If you are reading this post at a site other than Bookfoolery or its RSS feed, you are reading a stolen feed. Email bookfoolery@gmail.com for written permission to reproduce text or photos.
Posted by Bookfool at 12:50 PM