The City We Became by N. K. Jemisin 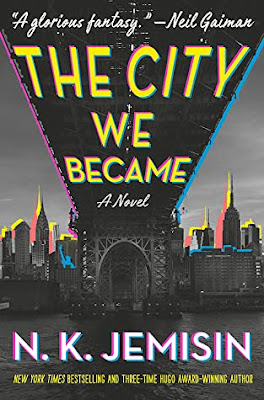 I bought a copy of The City We Became by N. K. Jemisin because I kept seeing it all over Instagram and while I'm pretty sure I couldn't figure out quite what it was about, I was intrigued. I've heard of the author but I'd never read any of her books and The City We Became is the first in a series, so it seemed like a good place to start.

And, now I understand why I was unsure what the book is about. You can call it speculative fiction or urban fantasy; I prefer the latter. A person represents or is, each borough of New York City as the city is about to be thrust into an inter-dimensional war. Each of the boroughs personified by an individual must figure out how to protect the city and is faced with unique challenges of his or her own. Gradually, the individuals/boroughs seek each other out because they will have more power together. But, one of the boroughs is weak and influenced by the dark side (so to speak). How will they win without the combined power needed to face the enemy?

What I loved about The City We Became was that it tackled so many subjects. The people who represent the boroughs are an extremely diverse bunch and with them come their personal histories and experiences. So, through their experience, we see racism, misogyny, sexism, xenophobia, entitlement, the problem with gentrification, the virtual erasure of Native Americans from a city's consciousness. It is both brilliant and entirely unique.

Highly recommended - Astounding writing. I don't normally like fantasy (although I'm intrigued by the concept of the multiverse) but The City We Became is a wild ride and it touches on so many important topics that I loved it for that alone. I did occasionally find it a bit overwhelming; that is typical of fantasies, for me, and the reason I seldom read them. But, the ending was absolutely perfect and I'll probably end up sending this book to my son in New Jersey (who works in Manhattan), at some point. I think he'll appreciate the way the author described and personified each of the boroughs and I'm certain he'll love the ending.


©2020 Nancy Horner. All rights reserved. If you are reading this post at a site other than Bookfoolery or its RSS feed, you are reading a stolen feed. Email bookfoolery@gmail.com for written permission to reproduce text or photos.
Posted by Bookfool at 12:07 PM