Why Are All the Black Kids Sitting Together in the Cafeteria? by Beverly Daniel Tatum, PhD 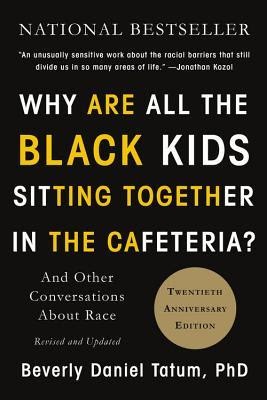 Expressing [...] deep frustration in response to [George] Zimmerman's acquittal, Alicia Garza, a community organizer based in Oakland, California, posted this message on Facebook: "I continue to be surprised at how little black lives matter . . . Black people, I love you. I love us. Our lives matter." Garza's friend, Patrisse Cullors, a Los Angeles-based activist, shared the Facebook post and added the hashtag, powerful in its simplicity, #BlackLivesMatter. Opal Tometi, a social-justice activist living in New York City, reached out to Garza and offered to help build a digital platform that could mobilize action for meaningful change. [...] The #BlackLivesMatter message resonated with many across the social media platforms of Facebook and Twitter, and with that amplification a rallying cry for the millennial generation was born.

I chose this quote because I watched a video, a few days ago, in which a White man held a sign saying "Black Lives Matter" and people yelled abuse at him, calling him a traitor to his race, flipping him off, asking him, "What about White lives?" Maybe those people will never get it but it's always been clear to me what the protesters in the BLM movement are saying has never meant Black Lives Matter More Than Others. If they did, I'm sure that's what the hashtag would say. No, it's always been about the fact that Blacks are treated with less value and dignity, killed by police and incarcerated at a higher rate, discriminated against quietly through societal structure. Black people in this movement —a peaceful movement started by women— have done their best to explain, although it shouldn't be necessary. But, the anger amongst certain groups who choose to take offense persists. And, Why Are All the Black Kids Sitting Together in the Cafeteria? makes it crystal clear why such a movement is necessary, why it's particularly necessary for young people of any color to find their people, at least for a time.

The author of Why Are All the Black Kids Sitting Together in the Cafeteria? is a psychologist who was charged with teaching about racism at university level, way back in the 80s or 90s (I didn't mark the date mentioned), who has been researching, talking about, and living racism as a light-skinned Black woman, for decades. She knows her stuff. The book I read is the updated 2017 version; the original was published in 1997. And, it is not exclusively about Blacks. It's about the psychology of why Black kids cluster together (the short answer: because they need to, at least for a time, to understand who they are) but the book is also about dominant groups and how those who are dominant convince the people they consider beneath them that they are, in fact, lesser. That includes women and other minorities.

The relationship of the dominants to the subordinates is often one in which the targeted group is labeled as defective or substandard in significant ways. For example, Blacks have historically been characterized as less intelligent than Whites, and women have been viewed as less emotionally stable than men. The dominant group assigns roles to the subordinates that reflect the latter's devalued status, reserving the most highly valued roles in the society for themselves. Subordinates are usually said to be innately incapable of being able to perform the preferred roles. To the extent that the targeted group internalizes the images that the dominant group reflects back to them, they may find it difficult to believe in their own ability.

The comment about the targeted group internalizing images reflected back by the dominant group explains the women who claimed Hillary Clinton should not be president because women are weak.  If you've never seen the video in which a woman said Hillary shouldn't be president because she might have a hormone swing and start a war to Jordan Klepper, and then he asks, "But, haven't all wars been started by men?" you should. It's both hilarious and a good object lesson.

I'm getting off-track. There is so much depth to this book that I feel like I can't adequately describe it but it's a 5-star read that talks not only about the importance of developing identity for Blacks but about the concept of redlining that's kept blacks in less affluent neighborhoods, Affirmative Action (how it started and what it does and not do; the false concept of "ratios" as a legal imperative, for example), the ideology of "color blindness", White identity, multi-racial identity, and also that of Latinx, Native, Asian and Pacific Islanders, Middle Eastern/North African . . . everyone has some need to band together with other people who bear some similarity to them as their identities are developing. Tatum also goes into the importance of making sure children of other races and ethnic backgrounds adopted by White parents are exposed to people like them and how damaging it can be to not do so.

Highly recommended - I wish every adult would read this. An incredibly detailed and easily digestible book about race that goes far, far beyond what you expect from the title of the book but also explains the reasoning for banding together as one is developing his or her identity in a way that has completely clarified it, at least for this reader. In my case, I felt like I learned a lot about myself, as well. For example, while my friends were not entirely homogeneous, I mostly hung out with Christians because my identity was so thoroughly wrapped up in church, as a child. And, it was the Native Americans clustered together on the steps at lunchtime that I always wondered about, not Blacks. There were not many Blacks or other minorities in my hometown, in fact. It was White Bread City, probably 98% White. I'm fortunate that I grew up with a father who made it clear to us that racism was wrong. Most of my friends from home didn't learn that lesson.


Link to review of another book I recommend highly:

When They Call You a Terrorist: A Black Lives Matter Memoir by Patrice Kahn-Cullors and Asha Bandele


©2020 Nancy Horner. All rights reserved. If you are reading this post at a site other than Bookfoolery or its RSS feed, you are reading a stolen feed. Email bookfoolery@gmail.com for written permission to reproduce text or photos.
Posted by Bookfool at 9:36 PM