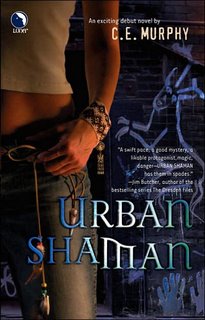 If you've followed my previous posts, you know my 14-year-old son and I have been sharing Urban Shaman by C.E. Murphy. He finished reading on Friday night and I reached the end on Saturday.

When were both around 100 pages into the book, kiddo and I had a conversation that went as follows:

Me: This is a pretty weird book.
Son: Of course it is.
Me: What do you mean, "Of course it is"?
Son: Mom, it's about a shaman. Any book that has a shaman on the cover is going to be weird. They have spirit guides. They battle evil. It's weird stuff.
Me: But you're enjoying it?
Son (stealing book for the second time): Duh.

So, yes, the book is a bit bizarre, particularly if you're not accustomed to the fantasy/magic genre. At the beginning of the novel, heroine Joanne Walker (aka, Siobhan Walkingstick) sees a woman being chased by a pack of otherworldly dogs, into the path of a man with a knife. Convinced she must go help the woman, Joanne triangulates the woman's approximate location with a bit of mental math using the landing speed of the plane, current time, and the estimated time Joanne spotted her from the plane. It turns out the woman was being chased by a Celtic god called Cernunnos and the pack of dogs belong to The Hunt . . . sort of the rest of the team of god-critters, I guess you could say. Getting herself nearly killed by Cernunnos leads Joanne to the revelation that she is a shaman, or healer, and it's up to her to save the world.

I'd personally rate this one about a 3.5/5 because the fantasy aspect occasionally lost me and, geez, poor Joanne gets the crud beat out of her practically every 50 pages. Son loved it and wanted to rush right out to buy the next in the series, Thunderbird Falls. I decided we'll wait and buy that one for vacation reading, which got me a typical teenage shrug. He knows I'm a book wimp and he'll get to read Thunderbird Falls, eventually. Son rated it 4.5/5.

Bookfool whose life's earnings are probably keeping the publishing world on its feet
Posted by Bookfool at 5:45 PM