Book and Film: The Four Feathers by A.E.W. Mason 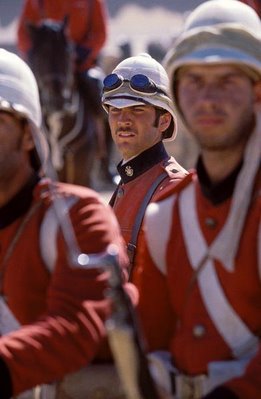 I haven't managed to locate an image specifically of the cover of the copy of The Four Feathers which I acquired. That's a shame because the illustration on my copy is just beautiful. Darn. So, you'll just have to settle for a photo of gorgeous Wes Bentley, who played Jack Durrance in the most recent film adaptation. Okay, he's worth looking at.

The Four Feathers by A.E.W. Mason is the story of British Guardsman Harry Feversham, who stuns his friends when he resigns from his regiment just after the announcement that they're being shipped out to the Sudan. First published in 1907, the book takes place in the late nineteenth century. Harry's father is a general who served during the Crimean War and frequently has friends from his war days over to reminisce. As a young man, Harry is well aware of his family's military history and the expectation that he will follow in the footsteps of his ancestors, including his heroic father.

So, Harry's resignation is a shock to all, including father and fiancee. In the presence of his fiancee, Ethne, Harry receives a parcel containing three feathers, symbols of cowardice, with a letter from the men who sent them. When Ethne asks him to elaborate, she adds a fourth feather and ends their engagement.

Harry is ruined, branded a coward by all but his best friend, Jack Durrance. After hiding out for a time, he meets a friend of his father's, Sutch, and informs Sutch of his plans. Then, he sets off for the Sudan. The only way he can possibly redeem himself and return the feathers is to prove his bravery.

The first act of bravery in the book was actually a little bizarre and I'm not sure I understood why he went through with it. However, it really didn't matter. In the book, Harry crosses the desert alone and eventually even makes certain that he is hauled off to prison to save one of the friends who sent him a feather. As the story unfolds, you can't help but realize that Harry is not just a man who can't live with being branded a coward; he is, in fact, a brave man whose fear has been totally misunderstood. I think it would ruin the book to elaborate, but I found Harry Feversham an amazing, inspiring character. Jack Durrance is also exceptional for his loyalty. In spite of the accusations and the fact that they don't see each other for many years, Jack only wavers briefly regarding their friendship and his belief in Harry.

The Four Feathers is a wonderful, adventurous tale. By today's standards, it's a bit slow, but that's true of a lot of so-called "classics". It's beautifully written and, in fact, I deliberately read it slowly because I cared about Harry, but at the same time I didn't want the book to end. Unfortunately, I wrote down the page numbers of my favorite passages and misplaced the piece of paper, so you'll just have to trust me that the writing is lovely. I think the memory of this one will linger for a long time. We'll see.

I actually watched the movie first, as I happened across it in a cheapie bin at Walmart, last year and then found the book later on. As we all know, novels are often massacred by Hollywood, but I still enjoy comparing a novel to its film unless I hold a story so close to my heart that I can't bear to have my thoughts about it altered. Since I'd already seen the movie, it wasn't a big deal to watch it, again, and compare. I wasn't going to ruin it for myself; and, in fact, I really wanted a reminder of what Jack looked like in the film because I only recall seeing that particular actor the one time and I remembered being startled that such a handsome man was not in the lead role. Although, I have to add that I think Heath Ledger was brilliant as Harry.

There were some distinctive differences between movie and film; but, I think that the most recent film version (there have been quite a few, apparently) is an excellent adaptation. The reason for Harry's fear and resignation from the army isn't explained quite as well, but the book is actually quite internally-driven. It's a novel of emotions and senses; that's very hard to portray on-screen and the changes that were made were, for the most part, necessary in order to translate emotion to action. In other words, I really like the movie - even after reading the novel.

Also finished: Home for the Holidays by Debbie Macomber - 2 stories, quick reading, enjoyed them both but I think I'll skip reviewing them.

Now reading: Summer in Tuscany by Elizabeth Adler, thanks to a recommendation by Les

I'm planning to go ahead and save my templates tonight or tomorrow (I'm wearing out - tomorrow looks more likely) then make the switch to beta. So, if things get hinky in here, you know why. Near Christmas seems like a good time to do the big switch, since it's a busy family time for most. After that, I'll update my links. We've been unable to switch to high-speed internet service, just yet (our server of choice is giving us a "no service in your area" message, although we know that isn't accurate) but I can finally post on other blogs, so I hope to get back to hopping around again, soon. Sorry for my absence.

Happy Holidays to all and wishes for a safe and happy 2007!!
Posted by Bookfool at 6:40 PM