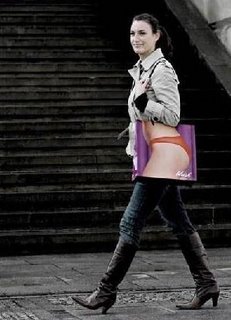 I've been tagged by Bellezza. Thanks, Bellezza, I love being tagged!

The Rules: Each player of this game starts with the “6 weird things about you”. People who get tagged need to write a blog of their own 6 weird things as well as state this rule clearly. In the end, you need to choose 6 people to be tagged and list their names. Don’t forget to leave a comment that says “you are tagged” in their comments and tell them to read your blog.

1. I can spend hours just looking up a silly image to go with one of these memes and then I end up with something that looks like a kindergartener designed it. What a waste. So weird, too, right? But, I really like the two I found for this particular meme.

2. I used to hate change and now I can't stand the lack of it. When I was young and my parents sold a chair, I told them they could NOT take it away and held on to the wooden slats at the back until I ran out of strength. Now, sheesh, you could have just about anything but my books. It's just stuff. I'd love to go back to moving every 18 months for the fresh start.

3. When my husband is away on business, if he doesn't call me within a certain amount of time, I am always, always frantic. I visualize him lying in a ditch or inside twisted wreckage and I'm just sure he's been carjacked or mugged or something until he calls. One time, I called the credit card companies to see if he'd managed to at least get to the airport to rent a car (yes, and nobody carjacked him, even though he was in Florida).

4. I have a couple of strange fears in public - that I'll smell bad or make an unpleasant, um, noise (you know, like pass gas - that qualifies for both). I told a friend about those fears, once, and she laughed so hard I thought she was going to give herself an aneurysm.

5. I married young because my then-boyfriend gave me an ultimatum - marry me or we break up - and I was afraid nobody else would ask. I was 19 when I walked down the aisle. A little young to be worrying about potentially becoming an old maid, I must admit. Amazingly, we're still together after 24 years and sometimes like each other.

6. Probably the weirdest thing about me is that I have the occasional experience that I'd call "psychic". The best example is probably the recurring vision that I had before 9/11. We were scheduled to leave for a trip to England and Scotland on Sept. 21 of 2001. From the moment my husband bought the tickets, I had this strange feeling that we weren't going to be there; I couldn't visualize myself in England even though I'd been there twice. As we got closer to the date of our departure, whenever I thought about our trip I would "see" a large passenger plane flying over green, green country and hear the word "Lockerbie". I thought I was seriously losing it, but it got so intense that I finally told my husband on Sunday, Sept. 9. He's known me since I was 17, so he's familiar with my "feelings" and knows they can be frighteningly accurate, but he absolutely did not know what to do about it. On Tuesday morning, I called him at work and said, 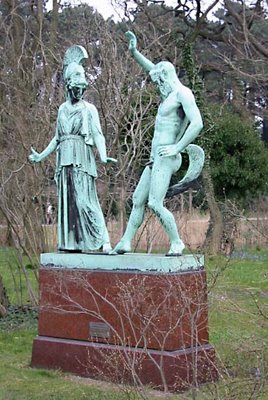 "Okay, now I understand that vision - Lockerbie was a terrorist attack involving a passenger plane, so it was just a warning of what was coming." I didn't think it really had anything to do with us, apart from the fact that we wouldn't be going to England. Hubby said he realized the meaning of my "vision" as soon as he saw what was happening. It was soooo weird.

Freaked out, anyone? And, what do you think of that statue? Weird enough for ya?

And, as I said, I could come up with a lot more. I'm definitely a beat or two off from the rest of humanity, but I'm used to it.

I'm having a terrible time getting to other blogs, sometimes, so I'll hope the people I tag have not already done this one. So . . . I nominate Angela (aka SciFiChick), Nat, Lotus, Sassymonkey, Marg, and Bookgirl. If you've already done this one, just ignore me. I can cope, really. And, I don't mind if it takes you a month to get to it; I know this is busy time for everyone.

Bookwise . . . I finished two books, this weekend: Holiday Wishes by Kate Austin, Stevi Mittman and Mary Schramski and Awakening by Kate Austin. Hope to get the reviews for those and some challenge buttons and lists up, soon. Pardon my sluggishness.

Yours in weirdness, Bookfool