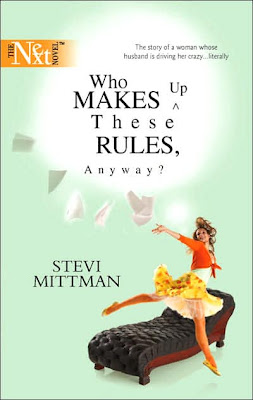 I finished three books over the weekend (assuming Monday is part of the weekend, which it's not; but, it felt like the weekend so I'm renaming Monday a weekend day, for this post).

Who Makes Up These Rules, Anyway? by Stevi Mittman is (near as I can tell) the beginning of the Teddi Bayer series. I read a short story starring Teddi in Holiday Wishes and loved it. Since I am currently a subscriber to the Next series --which means three or four Next titles arrive in my mailbox each month-- I went on an archaeological dig in order to locate other books in the series, already lodged on my shelves. I found two. That deserves a "Wahoo!".

It is one of those how-did-I-get-here moments, the kind I share with any mother whose three children individually are the sweetest kids on earth, but who collectively comprise a band of escapees from Children of the Corn.

Can anyone relate? In Who Makes Up These Rules, Anyway?, Teddi is married (not so in Holiday Wishes). For many years, Teddi's been worried about potentially becoming as nutso as her mother, who first attempted suicide after Teddi's little brother, Markie, drowned in their backyard swimming pool. Since Markie's death, Teddi's mother has regularly tried to check herself out of life and ended up in South Winds Psychiatric Hospital. Now, Teddi's reached the age of 37, the age at which her mother flipped. And, she appears to be losing her mind. Gallons of milk disappear, the refrigerator unplugs itself, money appears in her billfold and she remembers making deposits but not withdrawals. Is she forgetful or is something else going on? Her husband, Rio, is certain she's losing her mind and seems determined to convince her.

It's actually pretty obvious what's happening from the beginning, but that didn't matter to me one bit. Teddi is a fun character with loads of wit, the story is silly and light but with some interesting thoughts about being a woman, wife, and mother. In short, a unique twist on the Mom Lit subgenre. I can't say too much about the story without giving it all away, but I enjoyed it immensely. 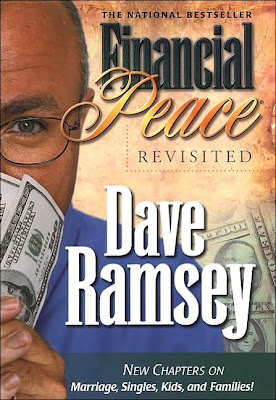 Financial Peace Revisited by Dave Ramsey is supposedly an updated version of Christian radio talk show host Ramsey's first book. Actually, I believe the book is sadly lacking in updated information. Since 2001, investment income has plummeted and the 12% average return rate Ramsey has used as the basis for most of his estimates is way off-base.

However, I chose to ignore the numbers and focus on the principles. Those who are familiar with Dave Ramsey know that he made a great deal of money in real estate in the 80's, borrowed against his own debts, spent like there was no tomorrow and lost everything. With creditors nipping at his heels, he came up with a way to get out of debt, save money for a rainy day and prepare for the future.

Complete with forms to help you budget, plan exactly where your money will go ("making your money work for you" rather than "working for your money"), get out of debt and save for the future, the book offers a complete solution to living within your means, paying for college, and saving for retirement. Does it work? Only if you're disciplined, of course. That's true of any budgeting method, but Ramsey throws in numerous testimonies and anecdotes that indicate the plan is effective if you are determined to go the long haul. It is not a quick fix, but a lifetime plan to escape from debt and work your way to financial peace. I've already put some of his principles to work for us, after an earlier reading of The Total Money Makeover and I can tell you that having an emergency fund along with no debt other than a house payment goes a long way toward helping keep the stress away. But, we need to work further on managing money and saving for the future, so hubby bought this book and a DVD describing his budgeting method. Both were excellent and I highly recommend them.

Warning #1: Ramsey has a bit of an ego and he likes the "finer things", like Jaguars. I don't agree with everything he says, but I do think his budgeting method is easily adaptable to differences of opinion.

Warning #2: Ramsey's finance-speak is directed at Americans, with specific references to funds and tax breaks that are most likely not available or pertinent to those outside the U.S. 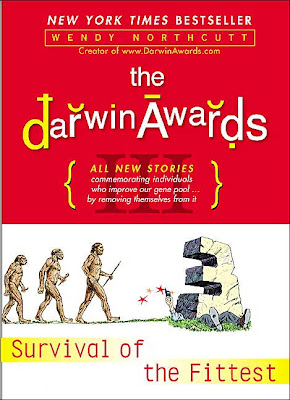 The Darwin Awards really offended me, when my eldest got a copy of the first book, several years ago, as the stories are tales of how people tragically died. Okay, yes, they died doing stupid things . . . but, still, they died. However, if you just ignore the fact that people somewhere have had to grieve for those who "won" a Darwin, it's pretty darned funny. Depressing, but true, as my husband just poured scalding soup over his hands less than two hours ago and I can easily imagine him becoming a Darwin Award winner; lack of common sense reigns supreme. The Darwin Awards: Survival of the Fittest is the third in the series.

I had a great time reading this book. I still couldn't help thinking, "Oh, wow, that is just so, so sad," at times. Like when a bunch of college students decided to jump down a laundry shoot for a joyride and it turned out libraries don't have laundry shoots -- so the young fellow who jumped into the chute ended up being crushed in a trash compactor after a stunning drop. What a horrible way to die, not to mention how awful it must have been for his family. The only good news is that his friends opted not to follow.

Best thing about the book: the opening bit on cell phone use. Because so many people die trying to talk on cell phones while driving, simple death-while-driving-and-talking deaths are totally eliminated from eligibility. Instead, to be nominated for a Darwin Award, one must remove his or her self from the gene pool (or the ability to reproduce) by doing something else which ups the stupidity level, like covering your other ear to keep out the noise of an oncoming train while placing a call and standing on the train tracks. Yep, it really happened.

As more and more people remove themselves from the gene pool while using cell phones, the species as a whole will become better equipped to safely coexist with this new technology. As the population of cell-phone idiots is slowly depleted, one can imagine a golden day, far in the future, when cell phones are considered as safe to use as a faucet.

I particularly loved her comments about cell phone use because it's become such a problem, locally. Recently, a young driver died in Vicksburg while trying to dial her cell and drive at highway speed. She lost control, skidded into a light pole and the driver's side of her car was literally wrapped around the pole. The young woman didn't even manage to press "send" to place her call before dying a heinous death. Unfortunately, we will probably be among the last states to outlaw cell phone use while driving, as Mississippi tends to be way behind the curve.

Right now I'm: Blinking repeatedly and wishing I had a gas mask because the hubby is using stinky Kilz on the hallway ceiling. Progress. Think progress.

Yesterday: We went to the Jackson Zoo and saw some interesting sights. I was admiring the Sable Antelope when a zookeeper walked by the back of the exhibit and said, "Hey, Sable! How ya doin'?" Hubby was enjoying the elephants when one of the keepers started waving a carrot and shouting, "Rosie! Hey, Rosie, come 'ere!" Rosie ignored the zookeeper until he started tossing carrots in her general direction. The tiger roared repeatedly and the flamingos screamed and pecked at each other. Obviously, we chose an excellent day for visiting the zoo.

Eldest son has returned to his apartment and job in Oxford, MS, where he attends Ole Miss. During his Christmas visit, we gifted him and Dave-Ramsey'd him, making him sit with us to create a budget that will help him stretch his money further. We also made him watch the DVD with us. The best moment: when the DVD player had a glitch and Daniel jumped up to leave the room, bent on a sudden need to floss. If nothing else, it was good for a laugh.

Hope those of you who are still off work (like my husband, who saves his vacation time for the end of the year and then stays home to drive me nuts for a full two weeks) are having a great time.