Three Books: To Play the Fool, Visions of Sugar Plums, and Lord Emsworth and Others

I've finished three books in the past four days and don't feel like posting lengthy reviews about any of them. So, I'm going to shoot for three quickie reviews.

1. To Play the Fool by Laurie R. King - When the body of a dog is cremated by the homeless residents of Golden Gate Park, police fill out a report and let it go. Then, a second cremation is attempted, this time the body of a homeless man. Investigators Kate Martinelli and Al Hawkin are called in to determine who was responsible for the man's death and why the homeless group attempted to cremate him.

After locating a suspect, Martinelli is baffled by his odd mode of speech. Instead of answering her questions directly, the man known only as "Brother Erasmus" speaks in quotes from books. A perplexed Kate Martinelli attempts to translate the meaning of his words, uncover his mysterious past life, and discover the reason for the homeless man's murder.

I'm not a big fan of mysteries, these days, but I enjoyed this particular story because I thought it was unique and often surprising, although at times a bit slow. Erasmus was an interesting character. I wasn't all that intrigued with Kate Martinelli, but I would read another mystery by this author as I thought it was well written.

2. Visions of Sugar Plums by Janet Evanovich - Stephanie Plum is not in the mood for Christmas. She hasn't even managed to buy a tree for her apartment, much less decorate for the holidays and buy presents. So, she certainly isn't in the mood to have a strange man materialize in her apartment and then follow her around everywhere. Who is this man, Diesel, and why does he insist on accompanying Stephanie as she tries to locate fugitive toymaker Sandy Claws? What's with Diesel's ability to unlock doors with the wave of a hand? And, will her family ever get off her case about the fact that she doesn't have a tree?

At a mere 149 pages, this particular Stephanie Plum is typically action-packed and an even faster read than her regular novels from the numbered series. The usual romp with fun dialogue, the expected car disaster and a special new hunk. I just love reading about Stephanie's adventures.

3. Lord Emsworth and Others by P. G. Wodehouse - A collection of nine short stories by the author of the Jeeves & Wooster stories, including some of his golf stories and at least one starring the Earl of Emsworth, a man who lives in a castle and has a passion for pigs.

I've been hacking away at this one for quite a while. Wodehouse stories are always an upper and so utterly timeless that I was caught a little off-guard by the conversation about whether or not "talkies" (aka films with soundtracks rather than silent films) were worth all the fuss. 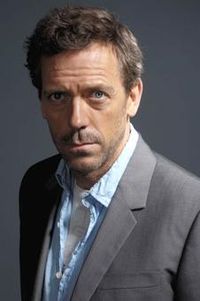 I also love Wodehouse's wording: "We all expired with mirth," sounds so much better than, "We all died laughing." Plus, saying "Wodehouse" and "Jeeves" in the same sentence gives me an excuse to post a photo of Hugh Laurie, the delightful actor who played Bertie Wooster in "Jeeves and Wooster" and who now stars as Gregory House, M.D. There he is, stunning as always. Yeah. That's an upper, all right.

Trying to get all caught up since this week's computer mess and phone tag with the eldest son after he was in an automobile accident (he's fine; the truck's apparently a mess). We also had a very sobering close call ourselves, last night, when a truck drifted into our lane on a twisty back road with gullies on each side and not even a foot or two of shoulder. Scary. I made the executive decision to stay at home and hide, today.

My new computer is finally set up, the email files were recovered from the dying computer but are separate from newer files to allow for a fresh start, and the doctor neglected to call my insurance company to approve the latest refill of Ambien . . . so I'm a bit of a sleepless wreck, but a happy one. Hubby and I have agreed to move up to a higher speed connection, within the next couple of weeks. That should help me get around to other blogs with a little more ease (actually, I'm hoping for a lot more ease; we have a pitiful 26.4 Kbps dial-up speed).

I'm still reading Earth in the Balance by Al Gore and Once Upon a Time by Gloria Vanderbilt, when the mood strikes (pretty much every free moment I can squeeze in, in other words), and have added The Christmas Strike by Nikki Rivers and Big Girls Don't Whine by Jan Silvious. It's true that big girls are not supposed to whine. However, I really did some major wailing upon discovering that our Bible Factory Outlet is closing. We'll soon be reduced to exactly one bookstore (a very small one) in a half-abandoned mall, no used bookstores, no book outlets or even outlets that contain books as part of the inventory. To wander through a decent book selection, we'll have to drive 50 miles. I think that's worth a good whine and a bar of chocolate, myself.

Best moment of the day: The neighborhood hawk swooped into our back yard, again. He made the very distinctive call we've learned to identify even from inside ("kreee"), landed in one of our gigantic old oak trees for a minute, and then moved on. Regardless of how frequently we may spot them, hawks always leave us awestruck. I particularly enjoy seeing the look of amazement on my husband's face.

Not sure, but . . . I think I might dismantle my positive thoughts blog and go back to writing about my good moments in here, as I've let it drop during the past week or so. I've found that I prefer sharing upbeat experiences on my book blog and that trying to come up with three good things every single day sometimes gets on my nerves. What say thee? Any thoughts?

Hope everyone is having a good, book-filled weekend.
Posted by Bookfool at 3:31 PM