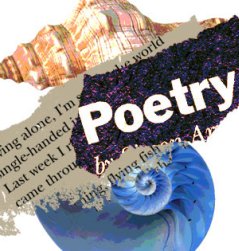 I've been tagged by Les and I've got a few minutes between chauffeuring duties, so here goes.

1. What's the first poem you remember reading/hearing/reacting to?
I can't say one specific poem first grabbed me, but we had a lovely Disney book of Mother Goose Rhymes that I absolutely loved. When I grew older and married a guy with the last name "Horner", I was shocked to find out that not everyone knew "Little Jack Horner" by heart. So, I quit saying, "Horner, you know, like Little Jack Horner?" and started spelling the darned name out. While you're my captive, I must tell you that there was, in fact, a Jack Horner who carried ten deeds for the king and stole one; hence, the origin of the poem. The plum Jack pulled out with his thumb was a plum piece of land. There is still a Lord Horner in England. No relation, darn it.

Actually, I had to memorize quite a few. The only one that really stands out in my memory is "Daffodils" by William Wordsworth because I loved it. And, I really hated reciting.

Like Les, I don't generally seek out poetry because I have no understanding of it, but when someone mentions a favorite poet I will flip through a book and read a little, maybe buy if I'm absolutely captivated. That seldom occurs, but after seeing Il Postino, I sought out Pablo Neruda's poetry because I loved everything I heard in the movie. And, I'm a Pablo Neruda fan, now, thank you very much.

I wish I could read Neruda's poetry in Spanish because (anecdote coming) when I was in high school I plopped down in the hallway beside a fellow I'd known since elementary school and he read some poetry to me in Spanish, then tried to describe it. But, he said, it loses it's beauty in the translation. Either way, it's utterly cool to have a handsome guy who emigrated from Spain read to you in his language. Whew. I'd have married him on the spot if he asked. Kidding, just kidding. I think.

4. A poem I'm likely to think about when asked about a favorite poem is . . .

"Daffodils" by Wordsworth. I just love it; it's a happy poem.

I used to write what I thought was poetry, but I was never schooled in meter or whatever you call it. I have no idea how one determines what is poetry and what's doggerel. I had a poem entered in a contest by an elementary school teacher and it was one of the few of my childhood writings that didn't win anything, so I've always just assumed it was garbage. And, I used to write song lyrics when I regularly played guitar - they pretty much sucked, as well.

Hmm, I'm not sure what to say to that one. I think I understand literature better than poetry, but imagery is not something anyone ever taught me, so I'm kind of a literary fool, as well. Geez, I'm feeling a little stupid. Let's just say I'm an avid fiction reader but not an avid poetry reader and leave it at that, shall we?

is often incomprehensible and sometimes inspiring, but there's a fine line between what works and doesn't, at least for me.

My husband blurts out the poems he learned in childhood, now and then. I think the last I heard was a recitation of something from Alice in Wonderland, which he started reciting because I mentioned that I really need to read that book. He's also a fan of Robert Service, so I get to hear that dude's poetry whenever I least expect it.

The person who writes it. William Wordsworth loved nature and lived in the stunning Lake Country in England (which is gorgeous even from an ugly motorway; I want to go there for a lengthy visit, one day). That really comes through in his poetry. Pablo Neruda was a man who loved women and his country; yep, you can tell. He also had a sense of humor. Here's an excerpt that makes me smile, from "To the Dead Poor Man" by Pablo Neruda:

"Today we are burying our own poor man;
our poor poor man.

He was always so badly off
that this is the first time
his person is personified."

It's really quite a touching poem, actually, but I've always thought that portion is pretty funny.

Off to take the kiddo to swim practice. I nominate anyone who wants to carry on this meme, but I'd especially like to see answers to these questions from Andi. Someone nudge Andi!!!
Posted by Bookfool at 4:55 PM