Dispatches from the Edge by Anderson Cooper

The new computer is giving me fits, I must admit, but I'll do my best to try to get back in the swing of things, here. I'd forgotten how you become accustomed to having your files set up a certain way and moving them is like packing and moving an entire house. The furniture has to be set up, just so, and the unpacking done in a certain way. Fortunately, I had Anderson Cooper's book cover saved as a draft before my meltdown. But, he's been a pain and shifted where I didn't want him, so pardon the delay in posting. 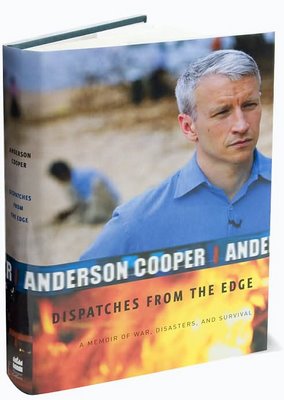 I'm in Maradi, Niger. It's late July 2005. A few days ago, I was in Rwanda with friends on vacation. I'd gone to see the mountain gorillas and to tour the new genocide museum. Not everyone's idea of fun, perhaps, but I've never been very good at taking time off. I burn on beaches, and get bored really quickly. I had a couple of days left in Rwanda, and was watching TV in my hotel room when a short report came on about starvation in Niger.

"According to a report by the United Nations, 3.5 million Nigerians are at risk of starvation, many of them children," the news anchor said, then moved on to something else.

I called CNN to see if I could go. My travel companions were pissed off, but not all that surprised. They were used to my bailing out on them at the last minute.

"Why would you want to go to Niger?" one of them asked when I told him of the change of plans.
"Why wouldn't you want to go?" I responded.
"Um, because I'm normal," he said, laughing.

I wished I knew how to explain it to them. It's as if a window opens and you realize the world has been reformed. I wanted to see the starvation. I needed to remind myself of its reality. I worry that if I get too comfortable, too complacent, I'll lose all feeling, all sensation.

Wow. If that doesn't tell you enough about Anderson Cooper, I don't know what will. Dispatches from the Edge is not just a book about Anderson Cooper's experiences in war- and disaster-ravaged areas, along with reflections on his past. It's all about who the man really is, why he needs to constantly throw himself into situations most of us would consider either too terrifying or too depressing to bear. It's the story of his journey inside himself and his desperate need to understand his brother's suicide, to somehow grasp why anyone could feel so hopeless that he would take his own life. Anderson Cooper simply chose to battle his grief in a very unusual way, by pursuing his passion. His passion has been to take himself to places where ordinary people are faced with extraordinary circumstances, to try to understand and impart their stories.

Since the places Anderson Cooper goes to tell those stories generally involve war and earthly disaster--and he's very good at getting to the heart of the matter--the book is compelling and gripping. Sound bites and clips chosen for their drama simply don't show the real picture. This is one of Cooper's greatest frustrations. But, apparently, his compassion shows through when he appears on the news. I can't say because we have neither cable or satellite service and I've actually never seen Cooper at work. But, I know he has a heart and I'm sure it shows.

I was particularly thrilled to read his thoughts on the aftermath of Hurricane Katrina, having lived through the hurricane and its aftermath, which is difficult to even begin to describe without ranting (and we had it easy in Vicksburg, with gusts up to about 100 mph). It was during his time in New Orleans that he finally began to recover from the loss of both his father and brother.

I'm not sure when it happened, when I realized that something had changed. I don't think there was a precise moment, a particular day. It's like when you're mourning and suddenly you become aware that the pain has faded. You don't remember exactly when it did. One day you laugh, and it shocks you. You forget that your body could make such a sound.

There are light moments, too. My favorite is the story of the time Cooper was stopped at a checkpoint by the National Guard and asked if he had a letter from the battalion commander:

"I don't need a letter from the battalion commander," I say. He nods and waves me on.
"Nice going, Obi Wan," Neil Hallsworth, my cameraman, says to me. "We're not the droids you're looking for."

I gulped down the first 50 pages of this book late on Saturday night and then gobbled the rest of the book the next day. It is an excellent, thought-provoking memoir of a fascinating, amazing man. My only complaint was that occasionally I had trouble reorienting myself because he jumped from time period to time period. But, since that was important to the relating of his story, I don't think it merits a rating drop. Two huge thumbs up for this one and extra special thanks to Barbara for sending it to me!!

Did reading make me want to meet the author? Yes, definitely.

Still reading: Once Upon a Time by Gloria Vanderbilt

Just started: Earth in the Balance by Al Gore

Thinking about: Rain, all that stuff that needs to be put away, why modern medicine hasn't come up with a nifty cure for migraines.

Feeling: Fat, but oddly upbeat for a gal with an earache and post-migraine blecch.

Be happy, buckle up, stay alive 'cause if you're reading this you are loved by a Bookfool.
Posted by Bookfool at 7:59 AM