The Epicure's Lament by Kate Christensen 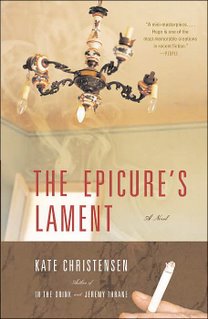 Today, Waverley feels like a big ship beached here on this sloping lawn, ablaze with lights and filled with sea-drunk madmen. Bellatrix is sawing away at her violin, first a bit of Dvorak, an odd piece she's been learning lately, full of spiky incidentals, shiveringly passionate asides, and now she's playing Bach, which is allowing me the only shred of focus I've had all day. I like her playing: I am thrilled to find something to like today, and by the fact that her well-played Bach is a pellucid bath of light that's enabling me to see clearly enough to write here.

First, a warning: This book is not for the faint of heart as it's written from a male perspective and the hero has all the appearance of a brilliant but hopeless sleazebag, although the deeper you delve into the story, the more you understand where he's coming from and why he appears to be so warped. And, you can't help but wonder . . . What will become of Hugo and his strange family? And, why on earth is he so magnetic?

Later--I am now back from shopping for that damn Christmas dinner. The impossible Vero insists with humorless academic doggedness on making lists, accompanying me to butcher, snooty yuppie organic overpriced upscale farmers' market, bakery, supermarket, etc., giving unsolicited advice and opinions and directions all the while, which I ignore, and therefore she and I are embroiled in a passive-aggressive mutual disapproval that must make everyone think we're husband and wife.

Well, that quote is a hint. He's fascinating. Every page allows a further peek into Hugo's history and what makes him tick. From nearly the beginning, the reader understands that he has done some very, very bad things, though.

Now that you're forwarned, I can tell you that I was completely mesmerized by The Epicure's Lament and the writing blew me away. The hero, Hugo Whittier, is a reclusive misanthrope who sees little purpose to much of anything other than food and s*x (not typed out to avoid bad hits) and his musings are often coarse. Language alone would cause some to close the book right away. But, set aside the seedy thoughts (and actions) and you won't understand Hugo at all.

The Epicure's Lament is a set of Hugo's fictional journals written during his dying days. The Whittier family has a fiercely blue-blooded history, remnants of the family's fortune allowing Hugo to do nothing but eat, write, sleep, and smoke in the crumbling family mansion on the Hudson River, if he so desires. And, he's perfectly content, in his own bent way, knowing that he is going to smoke himself to death, with a rare disease attacking him little by little, the sacrifice of cigarettes to save himself unfathomable.

Then, unexpectedly, people begin to move back into the family home, upsetting Hugo's plans to die in peace. As he reflects on his past and present, reads and quotes snippets of Montaigne's musings on the saneness of ending one's own life, and tolerates the growing family presence, he smokes even more vigorously, grumbles and insults fiercely, and perplexes everyone around him.

Occasionally, Hugo got on my nerves - particularly, in the middle of the book, when he appeared to be at his peak of pathos and debauchery. But, Christensen's an amazing writer and there's great depth to the story. The characters are a fun, oddball sort and stunningly real in their eccentrities. I was drawn in from the first page and closed the book completely satisfied. This is one I will definitely want to reread. Hugo himself would probably liken his story to the peeling of an onion, the fine layers of his life being slowly stripped away to reveal his core.

Did I say I loved this book? I loved this book. Avoid it, though, if you get sick and tired of the "f" word. Hugo is base and often repulsive. You want to wring his neck, kick his shins, slap him into sensibility; and, at the same time, find that you occasionally glimpse his tender side. Andi observed that he sounded a lot like the character Gregory House in House, M.D. Yep, definitely. I had a scruffed-up Hugh Jackman mentally cast in the role of Hugo, but I can easily imagine either Jackman or Laurie playing the role, were it to be translated to screen. Since I did occasionally need a minor break from Hugo, it gets a very close but not utterly perfect rating:

Currently reading: To Play the Fool by Laurie R. King - a mystery and therefore quite a departure for me as I've been through my mystery phase and my mystery-avoidance phase and settled into the little-bit-of-everything, but low on mystery, part of my life. I hope to go through plenty more phases, thank you.

Recently walked into my house and begging to be read: Dispatches from the Edge by Anderson Cooper (thanks to Queen Barbara of Pennsylvania, one of the most generous booklovers on Planet Earth and, unfortunately, not a blogger because she's immensely busy reading when she isn't working or wrapping up books and sending them to people).

Hope my American bloggy friends had an excellent Thanksgiving!!
Posted by Bookfool at 2:25 PM