Your Planet or Mine? by Susan Grant 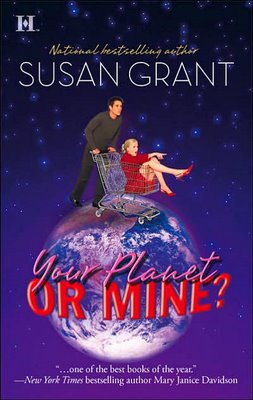 In Your Planet or Mine?, there's a nice, feisty heroine and a hunky hero from another planet. What more could you ask for? Fast-moving plot? Tons of action? You've got it.

California State Senator Jana Jasper comes from a long line of politicians who are deservedly well-respected. So, when Jana's family comes under fire for corruption, she is horrified. She makes a side trip to the grocery store for some comforting ice cream and bumps into an alien who just happens to look vaguely familiar.

Human, but from another planet, Cavin of Far Star has come to earth to save Jana and the people of her planet. Unfortunately, an assassin is after Cavin and Jana isn't entirely convinced that Cavin isn't a figment of her imagination. Will Cavin survive long enough to save earth? And, what on earth is Jana going to do about that handsome alien?

Your Planet or Mine? is a romance, technically speaking, and I'm not an avid romance reader but there are times you just need a little brain break and romantic comedy fits the bill for me. And, what a whopper of a fun story this one is. With an abundance of action including my favorite kind of scenes - people being chased and things blowing up - Your Planet or Mine? is a wild ride from beginning to end. I absolutely loved it and would have gobbled it up even faster if not for the fact that I'm in the midst of National Novel Writing Month. And, I do appreciate Susan Grant's ability to entertain even more than I normally would, thanks to the many hours I've spent wondering how on earth anyone ever manages to complete a novel and make it something worth reading. Many thanks to SciFi Chick for the excellent review that led me to this book!

And on to the latest:

Nano Report: Just over 31,000 words and I can feel my butt spreading. I really wish my walking buddy hadn't "fallen off the wagon", but the rain would have probably stopped us, anyway (insert lengthy sigh).

Today I drank: So many different sugary drinks I probably couldn't even list them if I tried. And, I'm not willing to try. But, somewhere in there you can insert at least one type of coffee, one tea and one soda. Take your pick. For one of the hot drinks I used the mug at right, which features a painting of Oxford's town square by Mississippi artist Wyatt Waters. It's available at Square Books because Wyatt's not stupid. He knows when to paint something commercially viable and sell it through the store featured in his painting. Smart guy.

Why the heck I'm posting after 4 am: Son #2's nap lasted forever, so we got a very late start on the last bit of that geography project I've been wailing about because the teacher absolutely cannot be pleased (if she takes off points indiscriminately, she simply leaves off the explanation). Since it was too late to take an Ambien and the alarm hasn't actually awakened me recently, I figured . . . nyeh, might as well stay up all night. I'm going to pay dearly for this.

Now focusing on: The Invention of Solitude by Paul Auster. My goodness, he has an interesting family history - and a rocking vocabulary. I want to be as intelligent as Paul Auster and write as descriptively as he does when I grow up. Oh, dear, can that happen if I last another 40 years?

Save me from: The song "Muskrat Love", which is on continuous mental replay in my Bookfool brain. Ugh. Didn't skip it fast enough while listening to America's Greatest Hits, this afternoon. I'll try diligently to avoid that making that mistake again, in the future. Ugh, ugh, ugh!

Group hugs all around!
Posted by Bookfool at 6:36 PM