Felt lousy, yesterday and not much better, today, so I've chosen to miss the local kick-off party in Jackson, MS. And, yet, in spite of feeling crappy I've managed to crank out enough words to keep my so-called Nano "novel" on track. With approximately 1667 words per day necessary to complete a 50,000-word book, not a lot of time is required if you type like a madwoman . . . or madman . . . for a few hours per day. But it's awfully hard to overcome the feeling that, "This sucks, this sucks, this sucks" has any relevance, whatsoever. It's not like anyone has to see the Nano book you write, yes? Except for the excerpt, which I did post and then desired to take right back off the board (it sucks, it sucks, it sucks). Time constraints and desire to sleep halted me.

Just read an excellent article in this month's Alternative Medicine magazine on "The Other Youth Drug Problem". They're referring to the overmedication of today's youth and the often tragic consequences. This is an article that hits close to home as two of my friends have lost a child (one aged 14, the other 20), to suicide that was almost undoubtedly due to changes in personality caused by antidepressants. One of my children was prescribed the same medication that led to the horrifying, needless death of my friend's son--for a stomach ache, my son was prescribed an antidepressant. Yes, he was stressed by the challenges of school, but isn't that a part of life, something that helps you learn how to deal with pressure in general, in the long run? My husband filled the prescription; I opened the trash can and tossed it in. Thirty dollars went down the drain, but my son didn't need it. Two years have passed and I can say he's thriving, accustomed to the pressure of student life and enjoying his current job. I hope more publications will jump on this topic and help to get the gigantic pharmaceutical bear under control.

Still reading: The Thirteenth Tale. I hope it doesn't take all month. 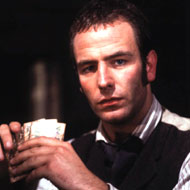 Watched for pure escapism: The Student Prince. This marks the first time I've seen the actor who played the bodyguard, Robson Green (pictured at left - hunky, eh?), and I was greatly disappointed to find that this handsome British chap is mostly a TV star in Great Britain. Darn. I'd really like to see him in a few more movies. However, the movie itself wasn't that great - sometimes funny, great setting, but not altogether convincing. Mr. Green's acting, and the role itself, were what made the movie enjoyable. Green played a bodyguard who, while assigned to protect a prince at Cambridge University, discovered a surprising love of literature and fell for the same woman as the prince.

And, here's what I really want. Is this too much to ask for? I want a writing studio like Hemingway's (image from www.andrew.cmu.edu/.../KeyWest/page_01.htm): 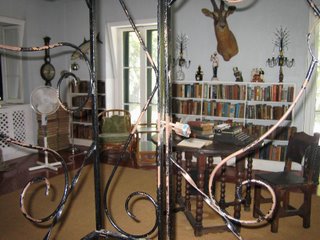