Ties that Bind, Ties that Break by Lensey Namioka 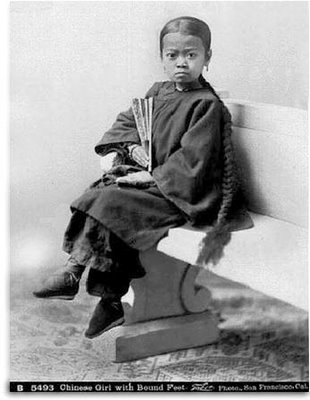 Ties that Bind, Ties that Break is a young adult novel about a Chinese girl who refuses to have her feet bound and must face the consequences of her decision. Read on the heels of Snowflower and the Secret Fan--thanks to the recommendation of my lovely friend, Eileen-- Ties that Bind is a quick read at only 154 pages, but still fascinating and informative . . . and it probably deserves not to end up being compared to Snowflower. However, I can't help it. I did just read Snowflower recently, after all, and it was the fascination with a culture which I knew little about that spawned my interest.

And, so I can tell you that Lily of Snowflower and Ailin of Ties were very different people, although both characters came from wealthy families. Born in different centuries, it would be easy to think that Ailin had it fairly easy. Lily would have likely ended up a concubine or worse if she had not been forced to have her feet bound - possibly dead. Ailin was threatened (to say more would divulge too much), but because she lived just after the turn of the 20th century and a revolution was occuring during the story, she had what I guess you could call the leeway to rebel. Times were changing, after all. I found Ailin a very courageous character and would have liked to read a more in-depth version of her story.

Nano report: Hit a brick wall in the morning and couldn't keep my eyes open, went back to sleep, stared at the screen, wrote for a while and . . . lo and behold, I made it to my day's goal. Wahoo! Not that anything is actually happening in my so-called novel, but I'm having fun as long as the little bars on my profile page keep rising.

Currently reading: The Invention of Solitude by Paul Auster . . . and that other book we won't mention.

Just walked into the house: Small Island by Andrea Levy

Back to work on the writing or off to bed? That is the question.